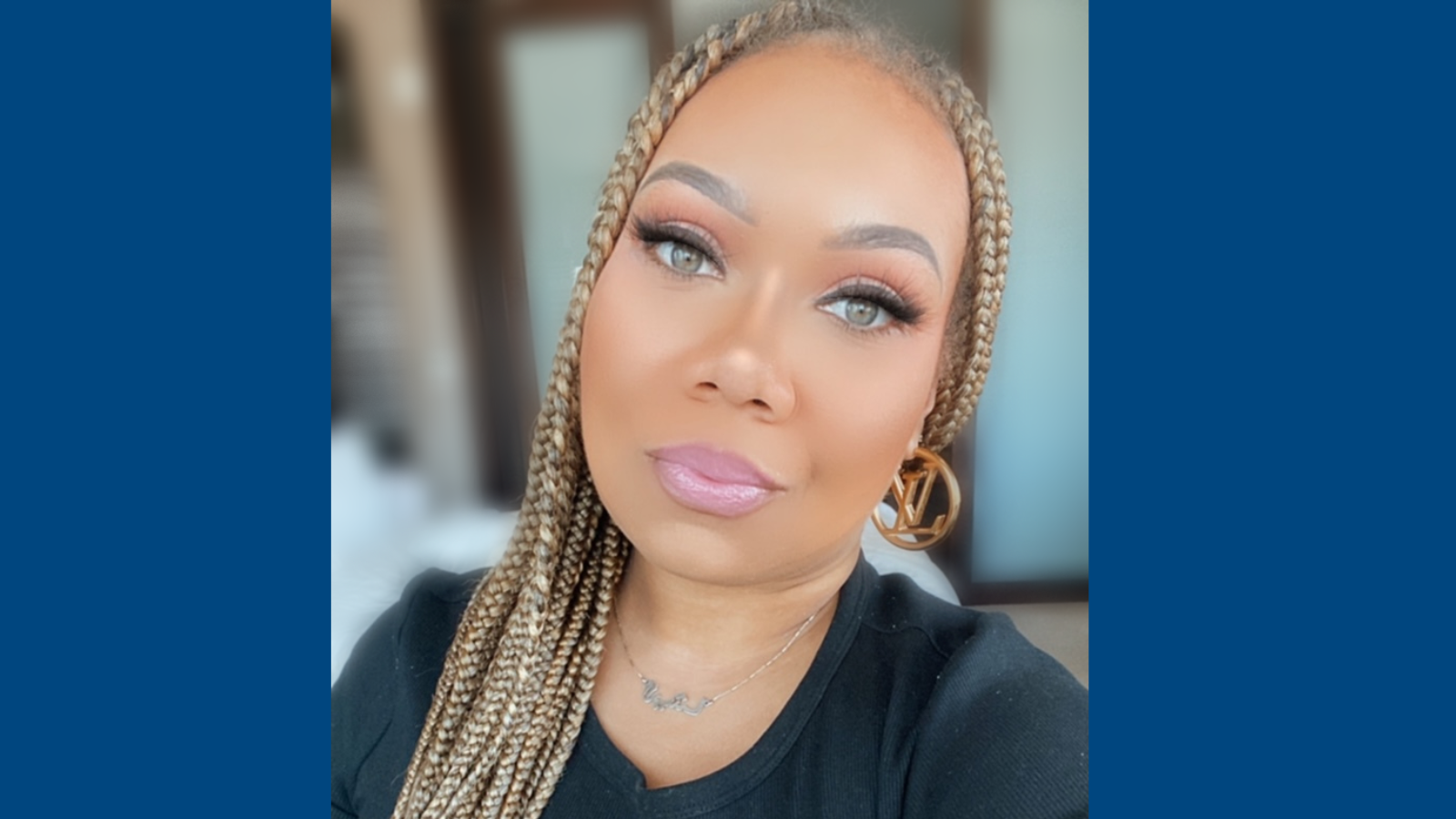 Laisha Dougherty was one of the first poet-athletes to participate in DC SCORES at its founding school, Marie Reed Elementary School.

Established by teacher Julie Kennedy in 1994, the team was one of the few after-school activities for girls at Marie Reed. In the winter, when bad weather forced the squad off the soccer field, the girls took up poetry, with Kennedy encouraging her students to write about ways they could serve their Adams Morgan neighborhood.

The program was open to third-graders and above and, excited by the prospect of playing soccer, Dougherty begged her parents to sign her up as soon as she reached the threshold. “I had never been the athletic type until DC SCORES,” she recalls. “But when it started, I knew it was my opportunity to participate in organized sports.”

Dougherty is the first to admit that she wasn’t a natural soccer player, but she loved every minute of her games. The camaraderie of the squad and her family’s steadfast support from the sidelines made her feel special. “I just had a really good village around me and support from loved ones all around,” she says.

Dougherty and her teammates didn’t know it yet, but they were among the first participants of a program that would grow into an international movement serving more than 11,000 children across North America. Kennedy’s unique soccer, poetry, and service-learning model was replicated at schools all over the District as the DC SCORES program and, by 1999, had spread to 13 different U.S. cities operating under the umbrella of America SCORES. 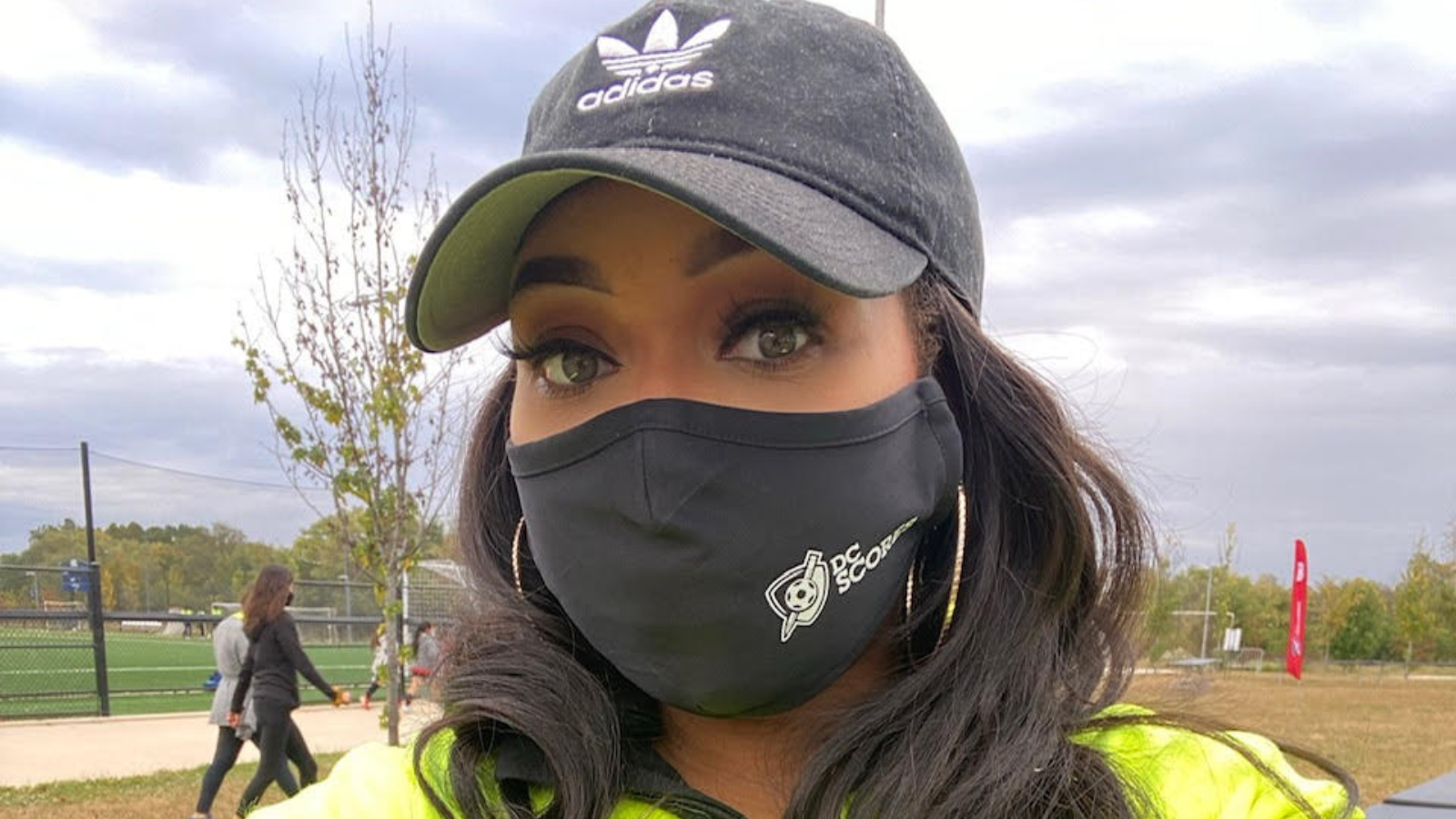 Dougherty has volunteered for DC SCORES at community events since reconnecting with the organization.

Dougherty currently works as Chief of Staff to DC Councilmember Kenyan McDuffie and she says that the support she received from the DC community as a child inspired her career in public service.

“I grew up in DC, I went to DC public schools. The city really poured into me. So, for me, it was just natural that I would pour back into the city to help generations of Washingtonians,” she explains.

After graduating from School Without Walls, Dougherty majored in Political Science at Hampton University, which she followed up with a Master’s in Public Policy at George Mason University. Hampton’s campus was three hours from Washington, which meant that she drifted away from DC SCORES and many of her former teammates when she began her undergraduate studies.

However, a chance encounter ten years later at a previous employer’s corporate giving information session helped her find her way back to the organization.

“Tony [Francavilla, Chief Development Officer for DC SCORES] was there,” she remembers, “and he’s talking about this soccer program that was founded at Marie Reed. I’m like, ‘wait a minute! I was in that program!’”

Dougherty introduced herself to Francavilla after the event and promised to stay in touch. A few months later, DC SCORES won a grant from The Junior League of Washington, a women’s membership nonprofit she was serving as a board member. “DC SCORES was crossing my path a lot,” she remarks. “It’s like the universe was saying, ‘you need to reconnect with this organization.’” 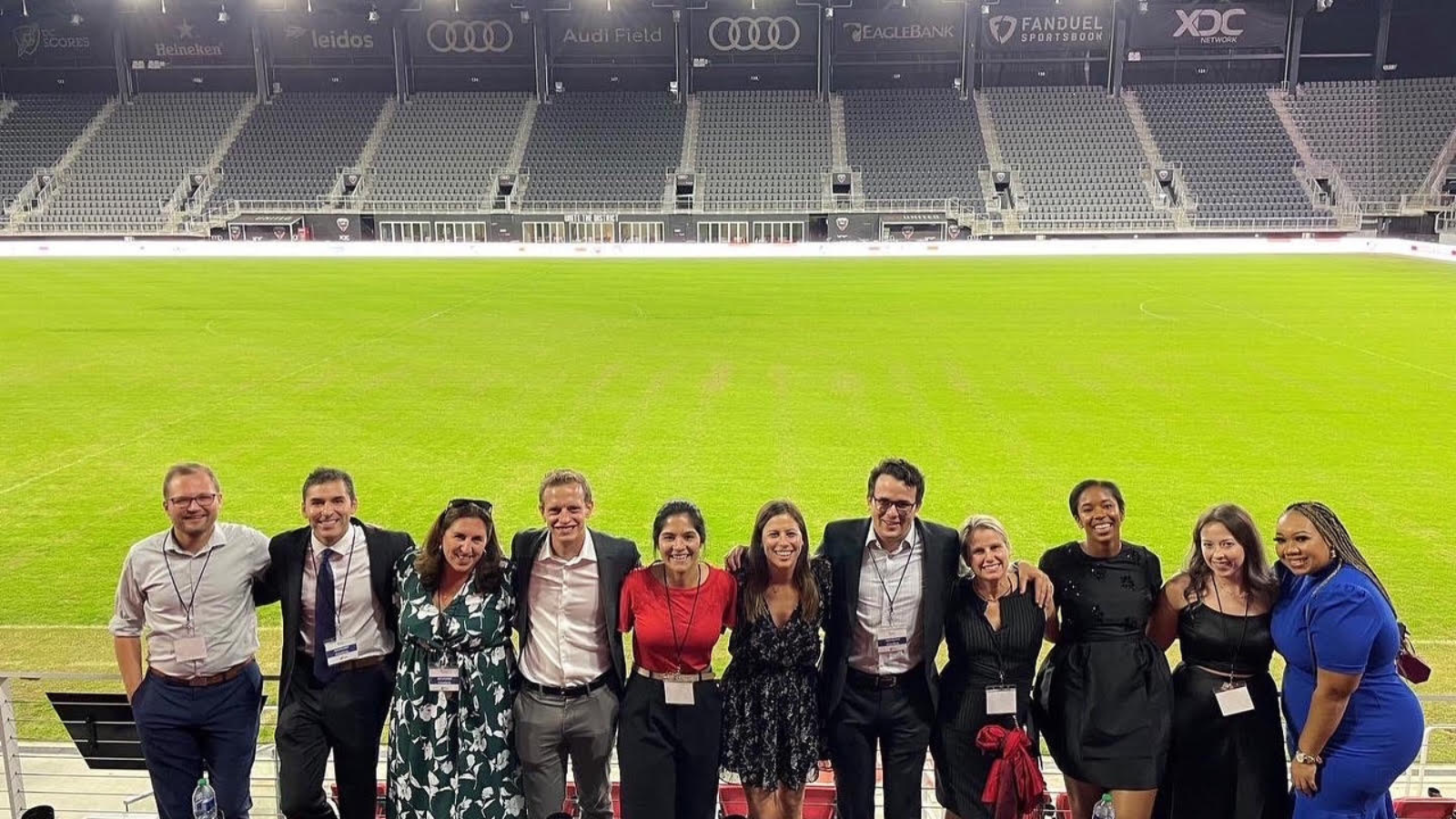 Dougherty poses with other members of the DC SCORES Advisory Council at the 2022 One Night One Goal fundraiser gala.

After that, Dougherty immersed herself in DC SCORES through its Advisory Council, a body of young professionals who serve the organization by volunteering their time and skills to its work. In addition to her public sector and nonprofit expertise, Dougherty contributes her perspectives as a native Washingtonian and DC SCORES alumna to the Council, helping the group stay connected with the communities it serves.

Her ability to share her personal DC SCORES experience also makes Dougherty a convincing champion for the organization in circles that have yet to encounter its work. Every year, she invites a large cohort of paying guests to DC SCORES’ annual gala, One Night One Goal. “I think it is phenomenal how much can be raised in a single night,” she says of the fundraiser. “People really believe in the organization and really support the work of DC SCORES.”

Her favorite events on the DC SCORES calendar, however, are those that allow her to engage directly with poet-athletes. “I got to do some ‘coaching’ with first and second-graders at this year’s Junior Frenzy,” she says. “Just seeing the kids’ faces light up when they’re playing soccer or when they get a goal reminds me of my time when I was a child doing this program and how much joy it brought me.

“We Believe In You”

Dougherty’s fondest memories from her own time in DC SCORES are of away games, when her family would stock up on snacks and travel across the city to support her from the sidelines.

“I remember it being really cold sometimes and just my family being there and cheering me on, whether I played well or not,” she remembers.

Her family’s encouragement, despite her performance on the field, taught her a valuable lesson that she has carried into her work as a public servant. “I wasn’t that good at soccer, but I was part of a team,” she says. “Even as an adult, it’s so important to understand that, while you may not always be the strongest player, you still have a purpose and a role on the team that aids in completing the overall goal.” 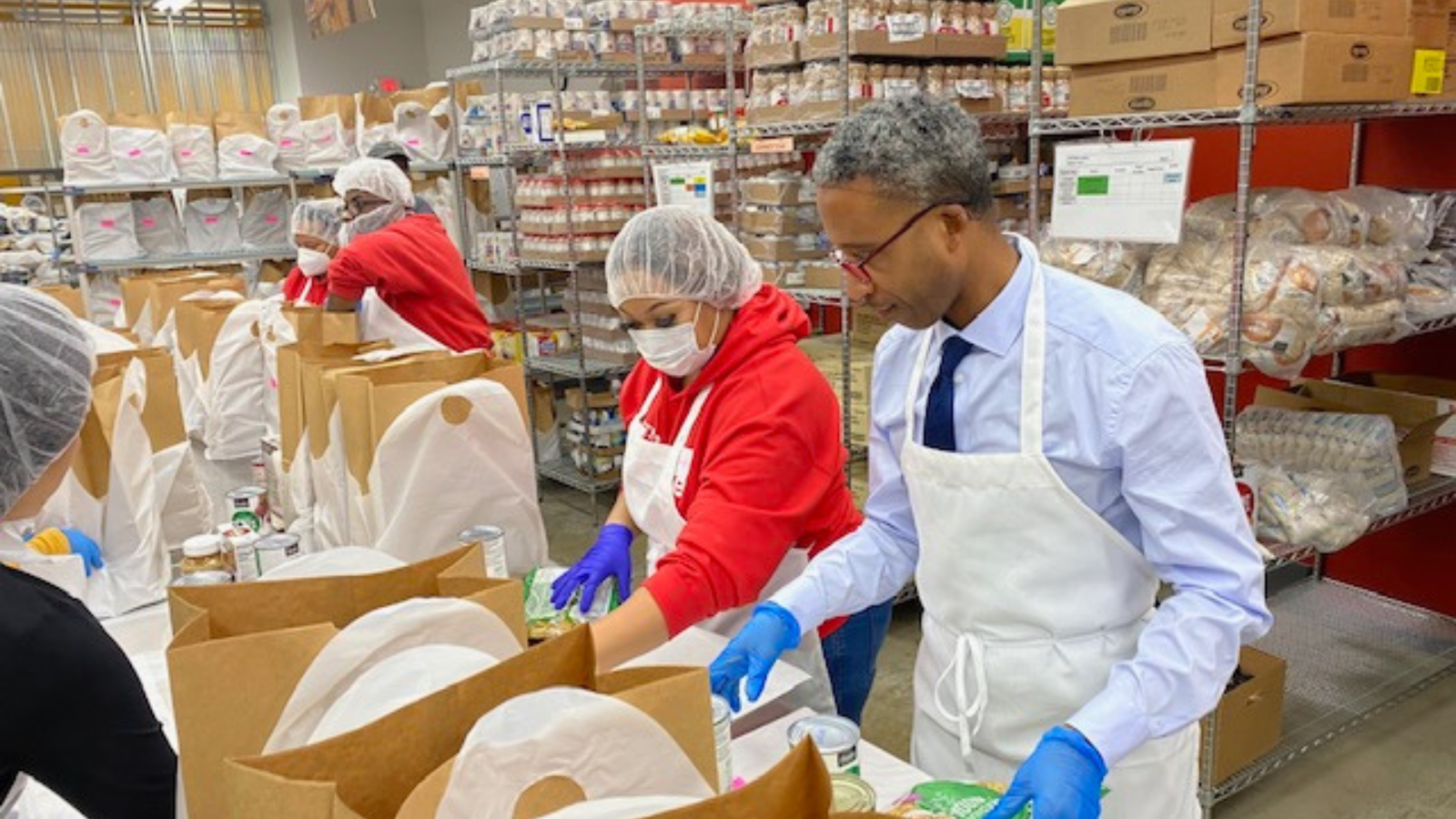 Through her work with CM McDuffie, Dougherty has fulfilled her ambition to become a public servant and support local people in DC.

Next year, DC SCORES will celebrate its 30th anniversary. “Thanks for making me feel old!” she jokes when reminded of the milestone. “I’m so excited to see DC SCORES still going and growing,” she adds. “It provided me with so many opportunities and now it’s providing other kids with those same opportunities. I can only imagine the places that these young people will go!”

Dougherty’s certainty that DC SCORES will continue to inspire kids who grow up to achieve big things comes from the stalwart support the organization has from local people. “DC SCORES has so many advocates in this city,” she says. “People know DC SCORES, they know the work that they’re doing, and they want to find ways to assist them as best as they can.”

Nearly three decades after first discovering what you can achieve with the backing of the DC SCORES community behind you, Dougherty has a message for the next generation of poet-athletes following in her footsteps.

“You have great support from DC SCORES staff and volunteers,” she stresses. “We are all pouring into you because we believe in you. All you have to do is take advantage of this opportunity.”

“Poetry Is My Foundation”: How Alumna Zarea Boyde Found Her Voice, and Her Power, Through DC SCORES