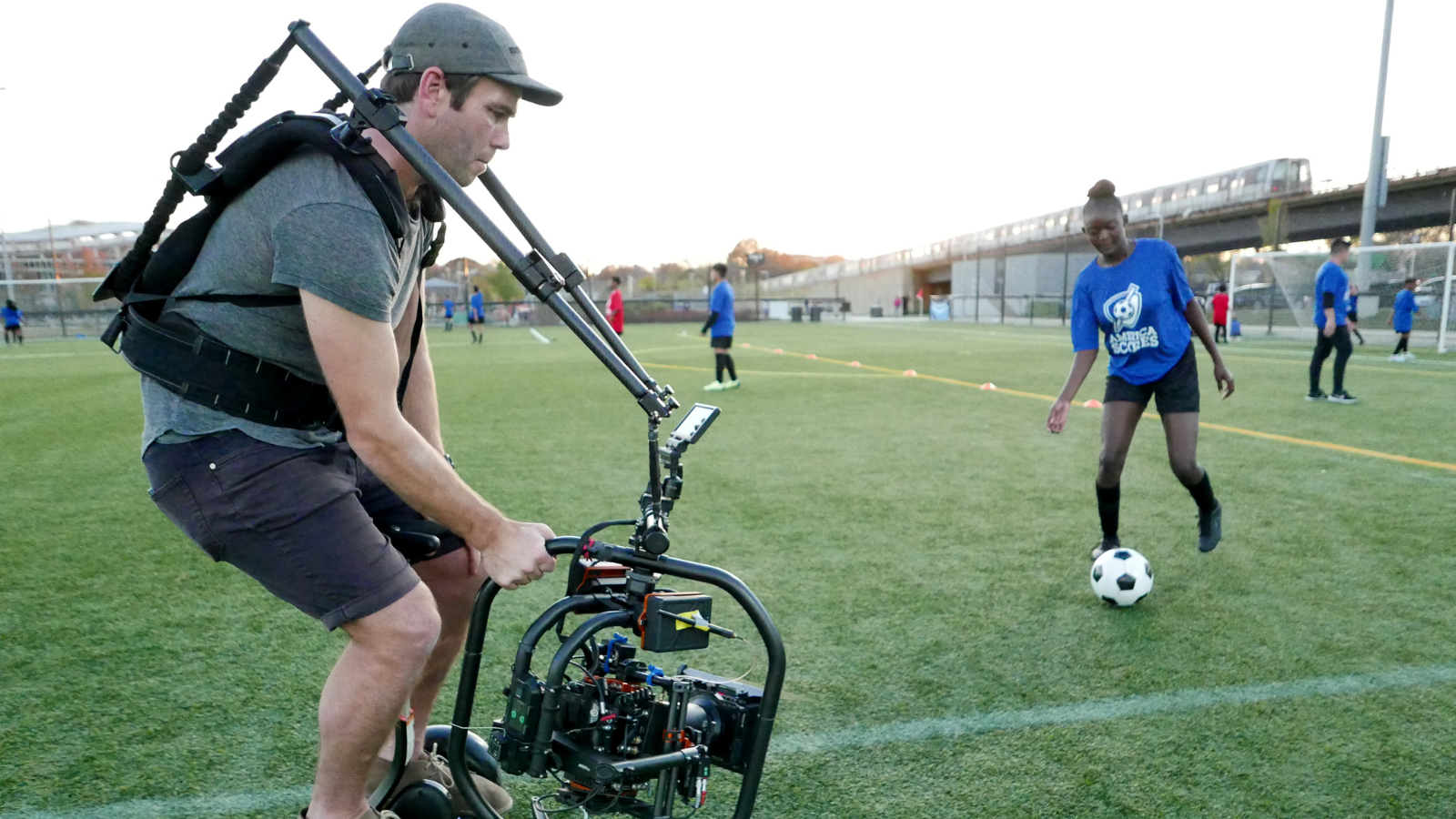 The slick 30-second America SCORES commercial showcases the talents of DC SCORES poet-athletes and the work of a number of DC-based creatives. Photo: Brandon Bloch

A soccer player places the ball on the penalty spot, breathes deeply, and shouts “Let’s go!” before striking cleanly into the back of the net. This isn’t a highlight from a World Cup match, but the thrilling final shot of a polished commercial that places America SCORES poet-athletes at the center of this year’s biggest soccer story.

Through a World Cup 2022 advertisement spot donated by the tournament’s US broadcaster, FOX Sports, America SCORES — an umbrella network of 11 SCORES cities serving more than 11,000 kids across the United States and Canada — is spreading the word about a new generation of poet-athletes who are poised to have a transformative impact on their local communities.

The 30-second spot, which follows a poet-athlete as they prepare for a poetry slam and a big soccer match, was developed pro bono by DC-based creative agency Artemis Ward. The agency worked with a local director and production crew to produce the ad, which features DC SCORES participants, alumni, and coaches.

“Through our work over the years with both America SCORES and DC SCORES, the Artemis Ward team has had the chance to see firsthand the energy and optimism and impact that SCORES inspires,” said Christopher Maier, Creative Director for Artemis Ward, on what motivated him and his colleagues throughout their work on the commercial. “Sit front row at a SCORES spoken-word performance or soccer match and you’ll know exactly what I mean — it’s something you’re excited to be a part of. And when you see these poet-athletes in action, you know they’re going places.”

The broadcaster has been a donor to America SCORES New York since the summer of 2020, but Toyama was offering Riordan a different kind of support: participation in a FOX initiative offering free advertising space to grassroots soccer organizations.

“This was potentially a five-year opportunity for the current Men’s World Cup, next year’s Women’s World Cup, and then, of course, the hosting of the next Men’s World Cup, in North America, on our doorsteps, in 2026,” Riordan explained. “The potential for our entire network to benefit in multiple ways was boundless if we approached it the right way.” 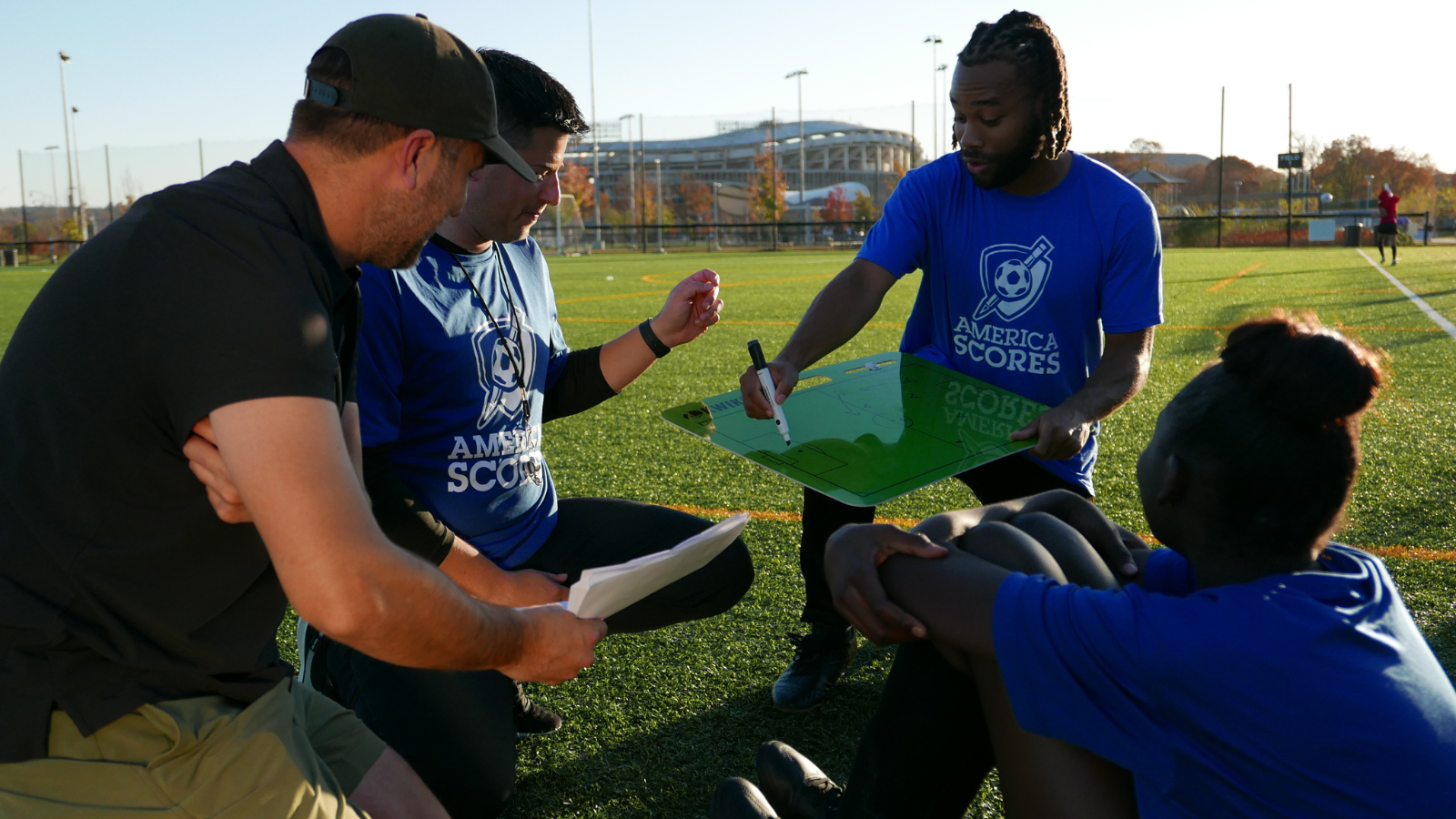 With the World Cup just weeks away, Riordan reached out to his colleagues across the SCORES network to gather recommendations for a creative agency that could help at short notice. Riordan’s counterpart at DC SCORES, Anthony Francavilla, knew just who to call.

“The folks at Artemis Ward have worked with us for years, they’ve attended slams and other events — they get SCORES! Add to that the fact that they are such a talented and accomplished agency, it was a no-brainer,” said Francavilla, who contacted the agency to ask if they would like to take the job.

“America SCORES has a powerful story to tell about creativity, about community, about mentorship, and, at heart, about these incredible youth whose abilities in poetry and soccer are nothing short of inspiring,” said Maier. “If we could help take this story of the modern-day poet-athlete to a World Cup audience and encourage new people from across North America to get involved, we were on board.”

Artemis Ward gathered a team together to develop a concept for the spot as rapidly as possible. Their pitch to the nonprofit focused on the holistic nature of the SCORES program, with the commercial initially leading the audience to believe they are following two students, a soccer player and a poet, before the camera pans to reveal that they are the same person: a poet-athlete.

“I had chills. There’s a lot of power in being a poet-athlete, and in building a generation of poet-athletes, so seeing such a polished proposal put the poet-athlete front and center blew me away. I couldn’t wait for folks to see it,” said Francavilla. 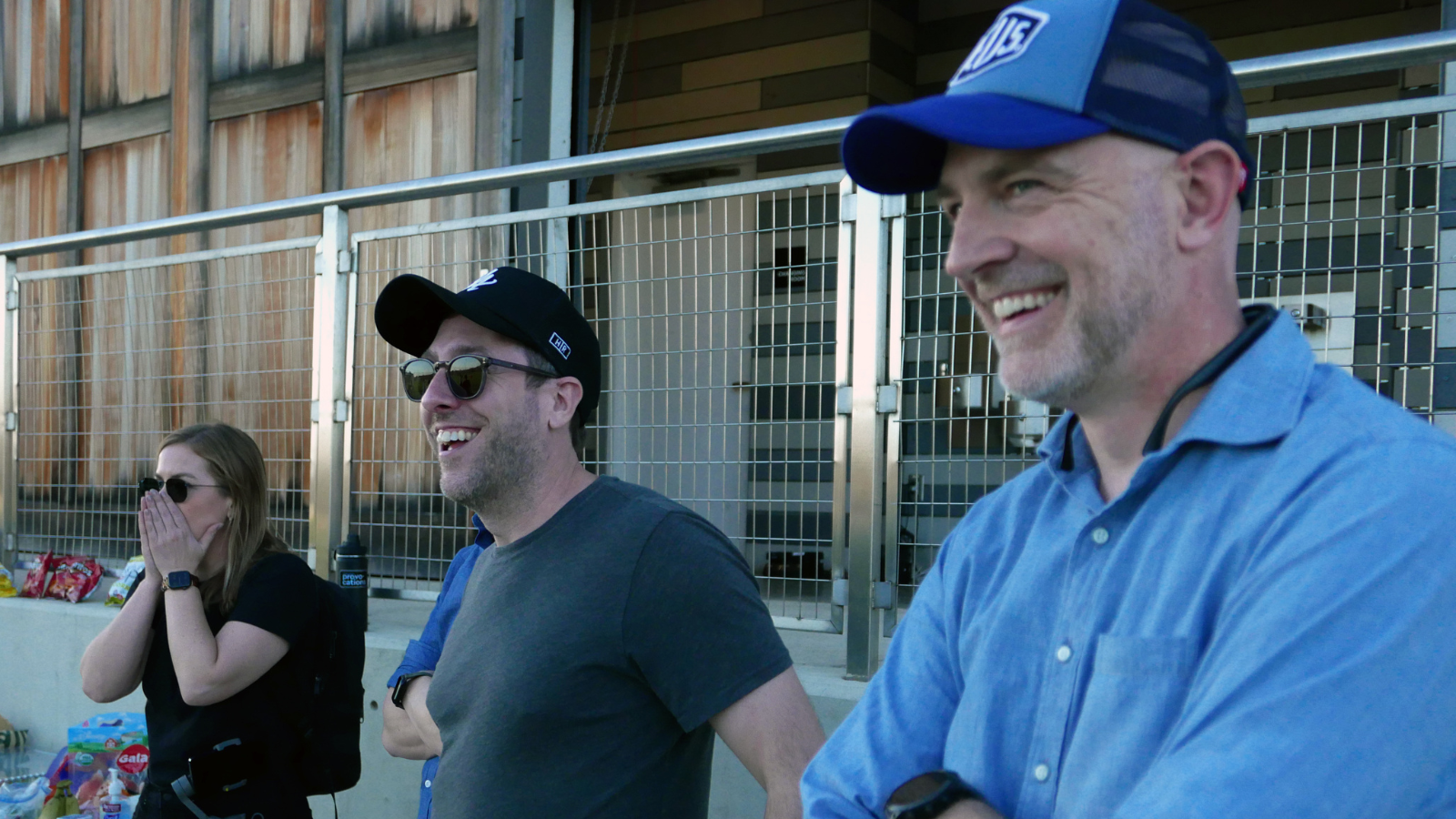 Danielle McKenrick, Chris Maier, and Colin Moffett of Artemis Ward watch a scene for the ad being filmed at The Fields of RFK. Photo: Brandon Bloch

In addition to highlighting the international reach of America SCORES, the commercial was an opportunity to foreground students, community leaders, and creatives based in DC. “DC is a world-class creative city — and we never miss an opportunity to put the city’s creative chops on display!” said Maier.

“Every scene in the commercial was shot in DC, including stops at Cardozo Education Campus — a stunning school perched on a hill overlooking downtown DC — and The Fields at RFK, a beautiful new athletic complex that sits alongside DC’s storied RFK Stadium. So, DC has its fingerprints all over this ad,” Maier added.

DC SCORES poet-athletes and coaches from Cardozo were featured in the commercial alongside the ad’s star, Mariame Traore, an alumna of the DC SCORES team at Leckie Education Campus. 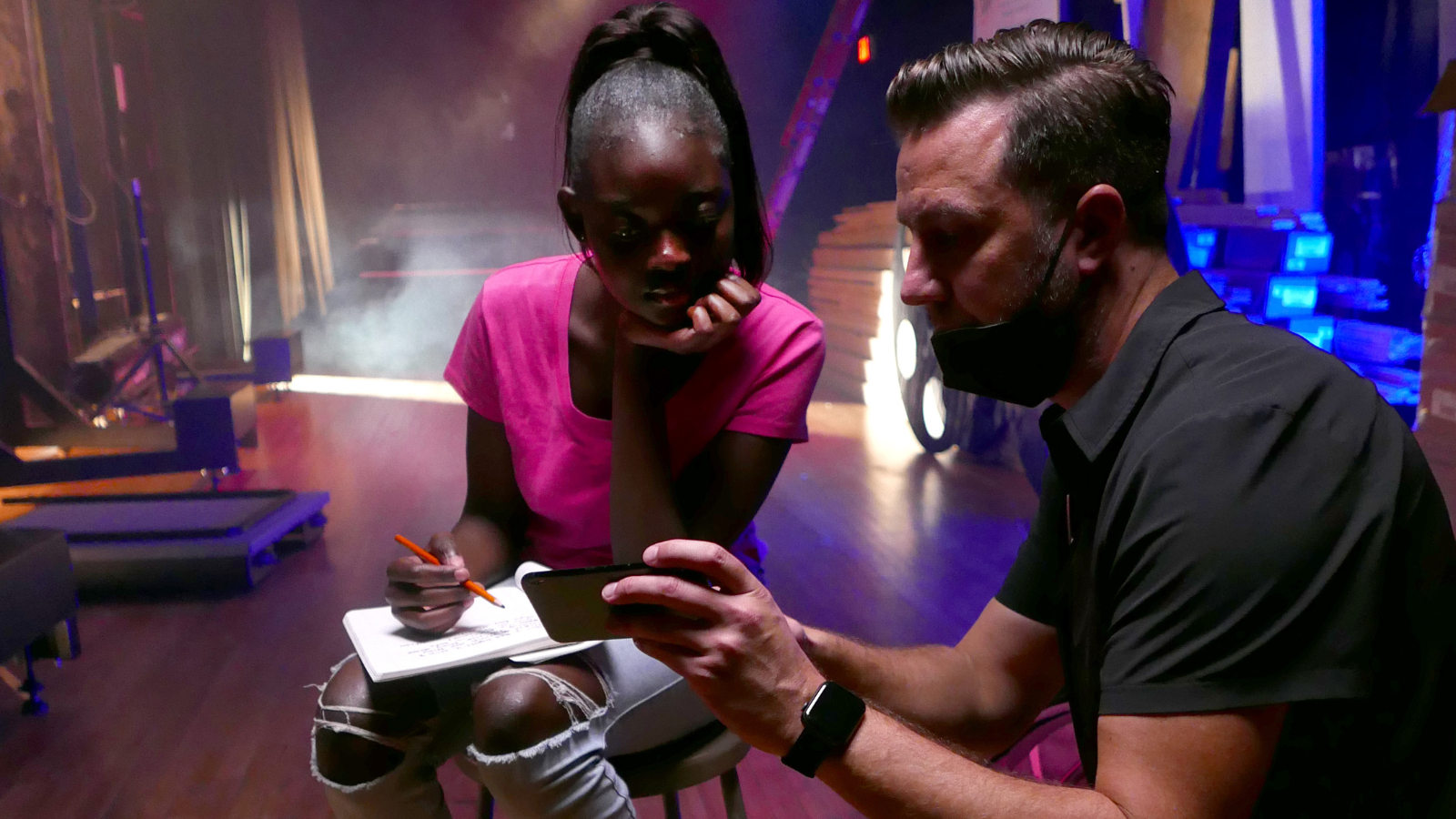 Bray talks through a shot with Traore. Photo: Brandon Bloch

The commercial — which is now in rotation on FOX Sports, FOX Desportes, FS1, and FS2 — builds on the international attention America SCORES gained when U.S. Soccer Federation partner Volkswagen donated their 2019 Women’s World Cup ad space to the organization. The 2019 advertisement featured a video montage of America SCORES programming and was also set to an original poem by Blackwell.

“Our latest ad really captures the ‘all in one’ nature of our work,” said America SCORES Executive Director Icy Jones. “Our students build teams on the soccer field, explore issues that impact their communities in their poetry, and work together on their service-learning projects to do good in their neighborhoods.”

“We’re excited to introduce more people to our work through this ad and are grateful to FOX, Artemis Ward, and the many people who came together to help make it a reality,” he added.

Viewers can watch the 2022 commercial throughout the World Cup coverage on FOX Sports, FOX Deportes, FS1, and FS2. Learn more about America SCORES at americascores.org. 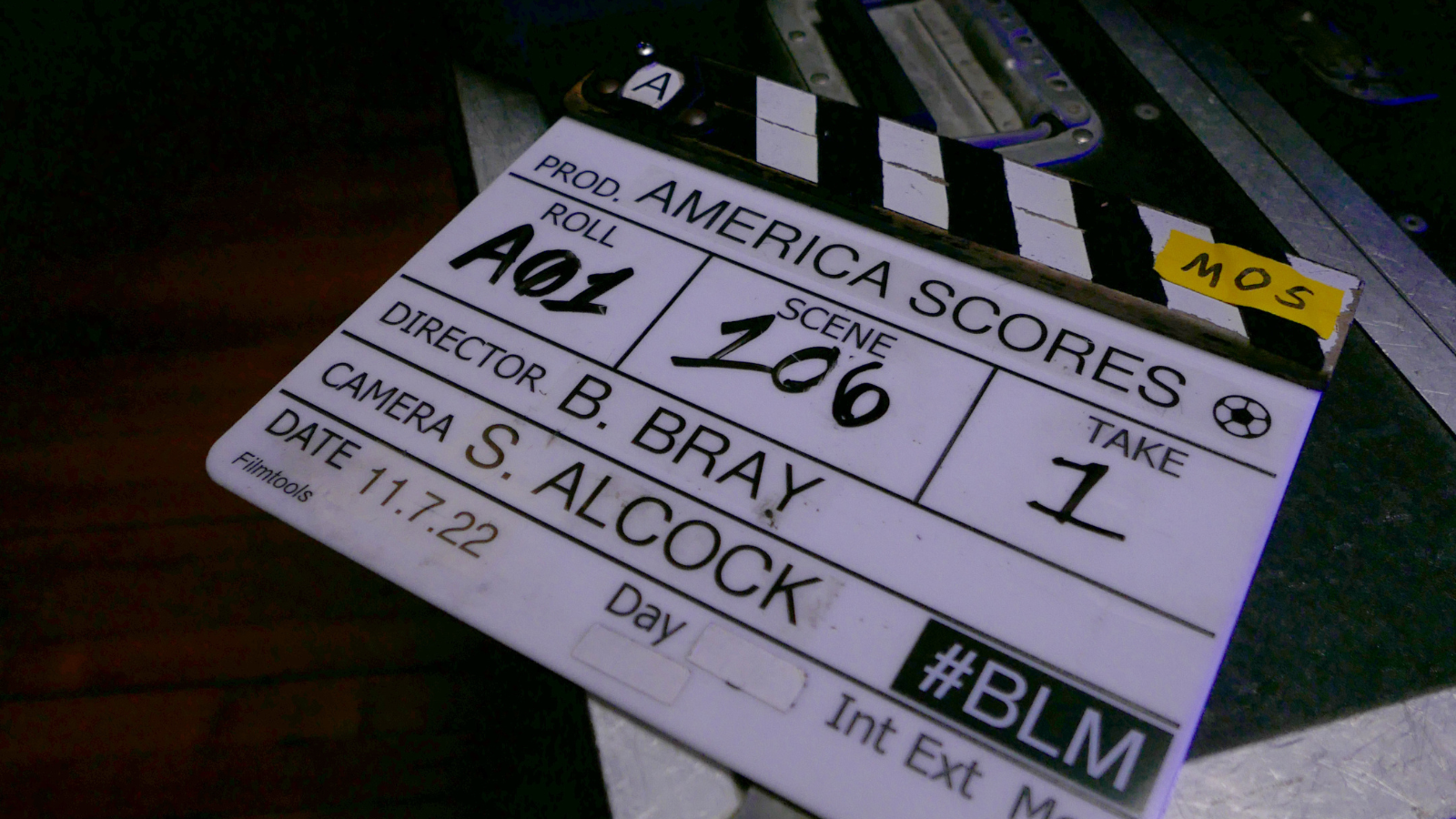 The commercial has the potential to run during the 2023 Women’s World Cup, as well as the 2026 Men’s World Cup, which will be held in cities across North America. Photo: Brandon Bloch

DC SCORES Wrapped: Celebrating a Year of Highlights From 2022