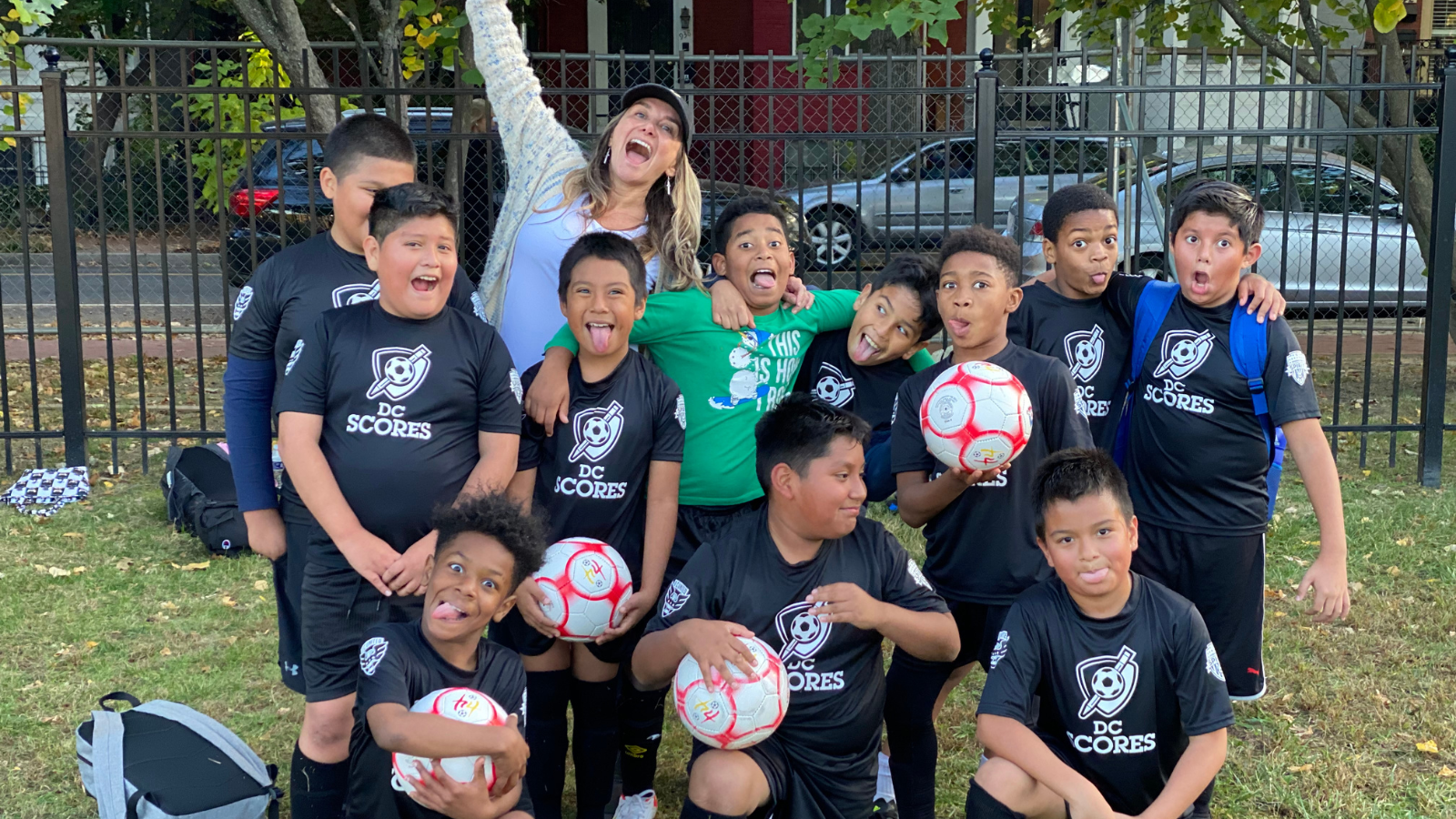 Coach Duarte and her colleagues have built an inclusive DC SCORES team where students learn that, if they work hard for each other, they can find success together.

Until this school year, Duarte only coached soccer for DC SCORES. However, when one of Seaton’s writing coaches left for a new school, she stepped up to assist her colleague, Jarreau Barnes, with poetry workshops as well.

The pair have high standards for the sessions. “They call me ‘dance mom,’” Duarte jokes, explaining that the kids’ comparison to the competitive “momagers” of reality TV comes from her rigorous poetry practices, when she makes her poet-athletes run through their performances over and over again until they “can say their poem in their sleep!”

“I like to see the kids succeed,” she says of what motivates the intense training sessions. “It’s so important for a child to see that a few months of effort gets the end result.”

Seaton has made it to the finals of numerous DC SCORES soccer tournaments and poetry slams, but these aren’t the results Duarte is chasing. The DC SCORES program teaches her students to work hard for each other and rewards them with tangible achievements, whether they win or lose. This, Duarte stresses, is transformative for the school community.

“Seaton’s super diverse — socioeconomic, race, language, everything,” she explains. “And everybody’s together on these teams. They bring everyone together in a very beautiful way.” 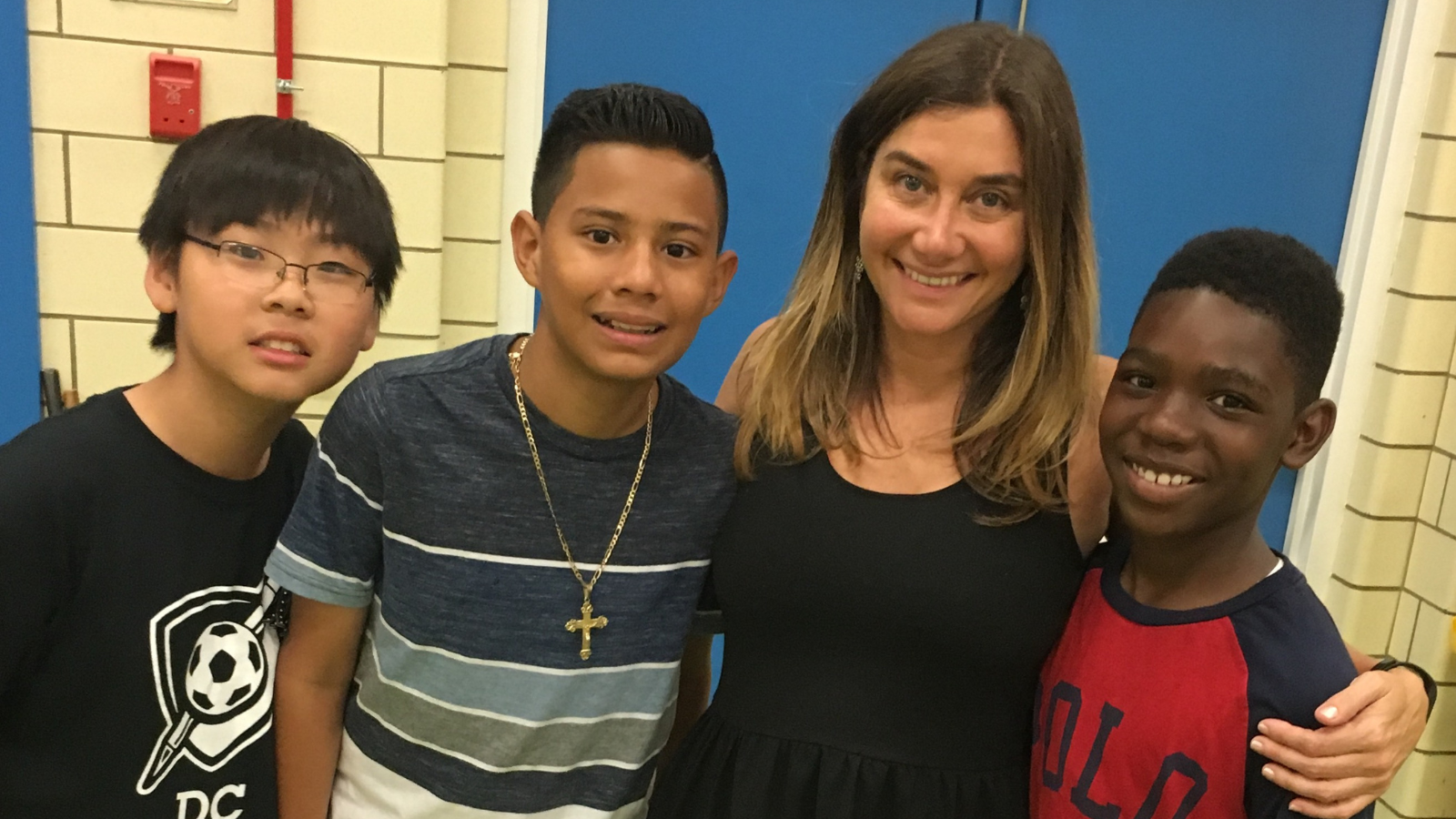 Duarte says that Seaton’s DC SCORES team is a place where children from a diverse range of backgrounds can see past their differences and create community.

Duarte’s dogged approach to DC SCORES practices reflects how she advocated for the nonprofit to expand into Seaton almost a decade ago.

Duarte’s students told her that their friends who attended Thomson Elementary School, just four blocks away, were participating in the program. “They kept asking me, ‘How come we don’t have soccer?’” she recalls.

So, Duarte began making phone calls to the DC SCORES office. “I really annoyed them a lot, I called a lot,” she says with a laugh. “And when they got the funding to expand to new schools, they thought of us.”

Originally from Asunción, Paraguay, Duarte moved to DC for graduate school in 1999. “I was going to go back home after a year, but then I ended up staying another year and another year,” she says.

Once Duarte began working at Seaton as an ESL (English as a Second Language) teacher, she knew she wouldn’t be leaving DC any time soon. “It’s my second home,” she says. “I’ve been at Seaton since 2001, so I have seen so many of these children grow up.” This semester, one of her students told Duarte that she had taught her mom. “I was like, ‘oh my god, I’m getting old!’” Duarte exclaims.

Duarte’s first few years of living in the United States were an adjustment. Suddenly, the language, food, and cultural traditions that were second nature in her home country were associated with complex U.S.-specific ideas about race and ethnicity.

“When I was living in Paraguay, I never thought about my identity,” she remarks. “I was already an adult when I started thinking about those things. I find the contrast with my students who, since they were very young, have to discover that part. What people think when they see you, your family, your neighborhood.” 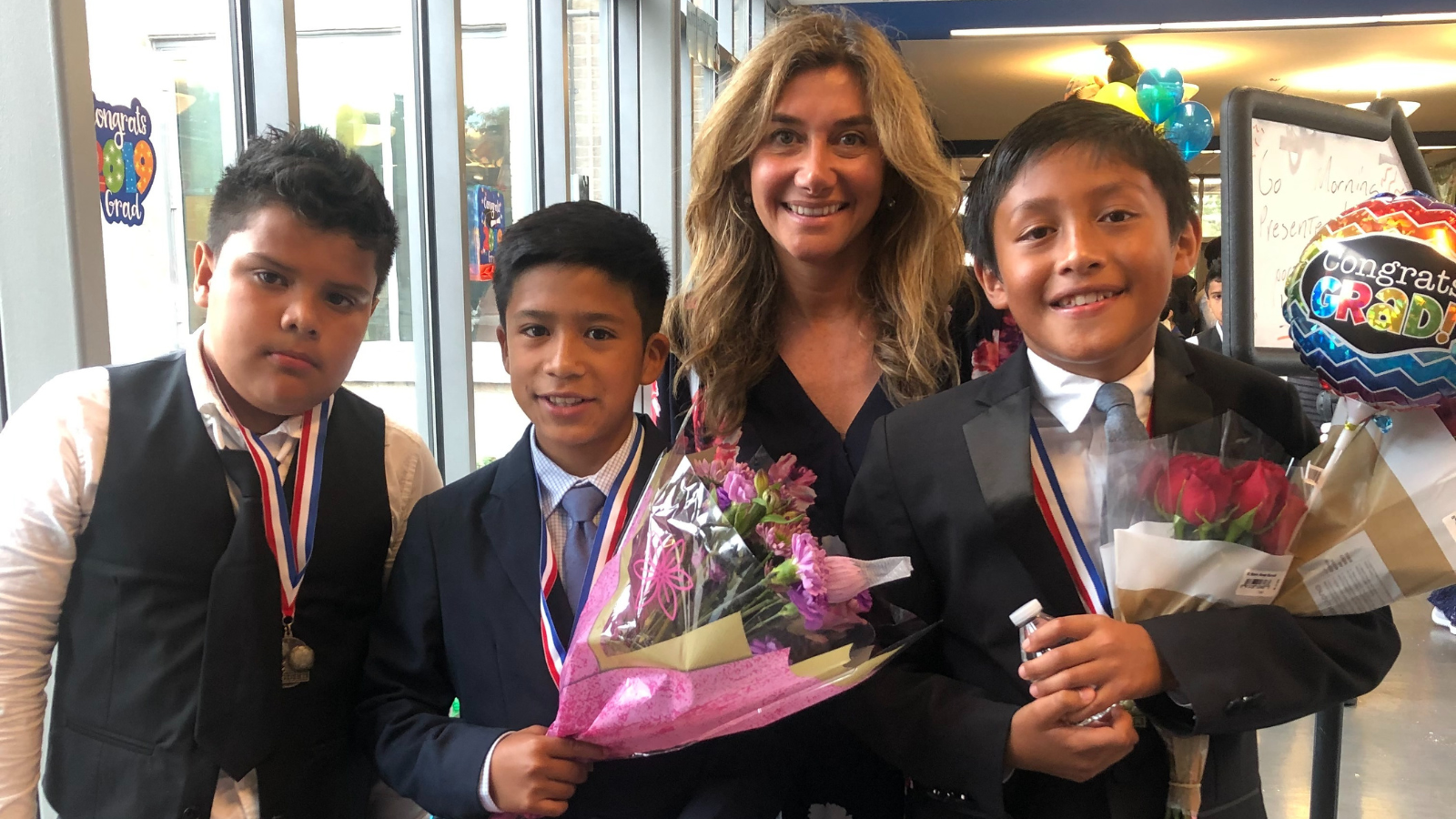 Having spent more than 20 years teaching at Seaton, Duarte has seen multiple generations of families graduate from the school.

Every school year, Duarte has students in her ESL classroom who are experiencing similar disorientation. She estimates that between 50% and 60% of new arrivals to Seaton are from Latin American countries. “When they come in, they don’t know anyone, they’re very shy, and they have nothing that they feel confident in,” she says. “But they know how to play soccer.”

Duarte and her colleagues have developed an informal process for welcoming these students to Seaton: they register them in the DC SCORES program.

Duarte recalls a recent conversation she had with her fellow DC SCORES soccer coach, Terrence Chavis, about a new student, “He tells me, ‘There’s a kid, a new kid. He just got here. He doesn’t speak any English. You should talk to him. Tell him he needs to play soccer with us!’”

By far the most popular sport in Latin America, soccer can be comfortingly familiar for students who have just emmigrated from the region. What’s more, Duarte fosters an inclusive environment on the DC SCORES team by using Spanish-language instruction in her coaching.

This approach is a hit with non-Spanish speakers on the team, too. “Honestly, it’s more fun in Spanish because it’s more animated,” Duarte says. “It’s funny because the other children are starting to understand. They are like, ‘mano, mano’ when it’s a handball.”

By providing a space where their language and cultural backgrounds are celebrated, Seaton’s DC SCORES team has become a safe haven for many of the immigrant children at the school.

“They don’t know anyone, but immediately they can have a couple of friends that they play soccer with and then that can grow into a team,” Duarte stresses. “That’s something that makes them feel appreciated and valuable. It gives them confidence.” 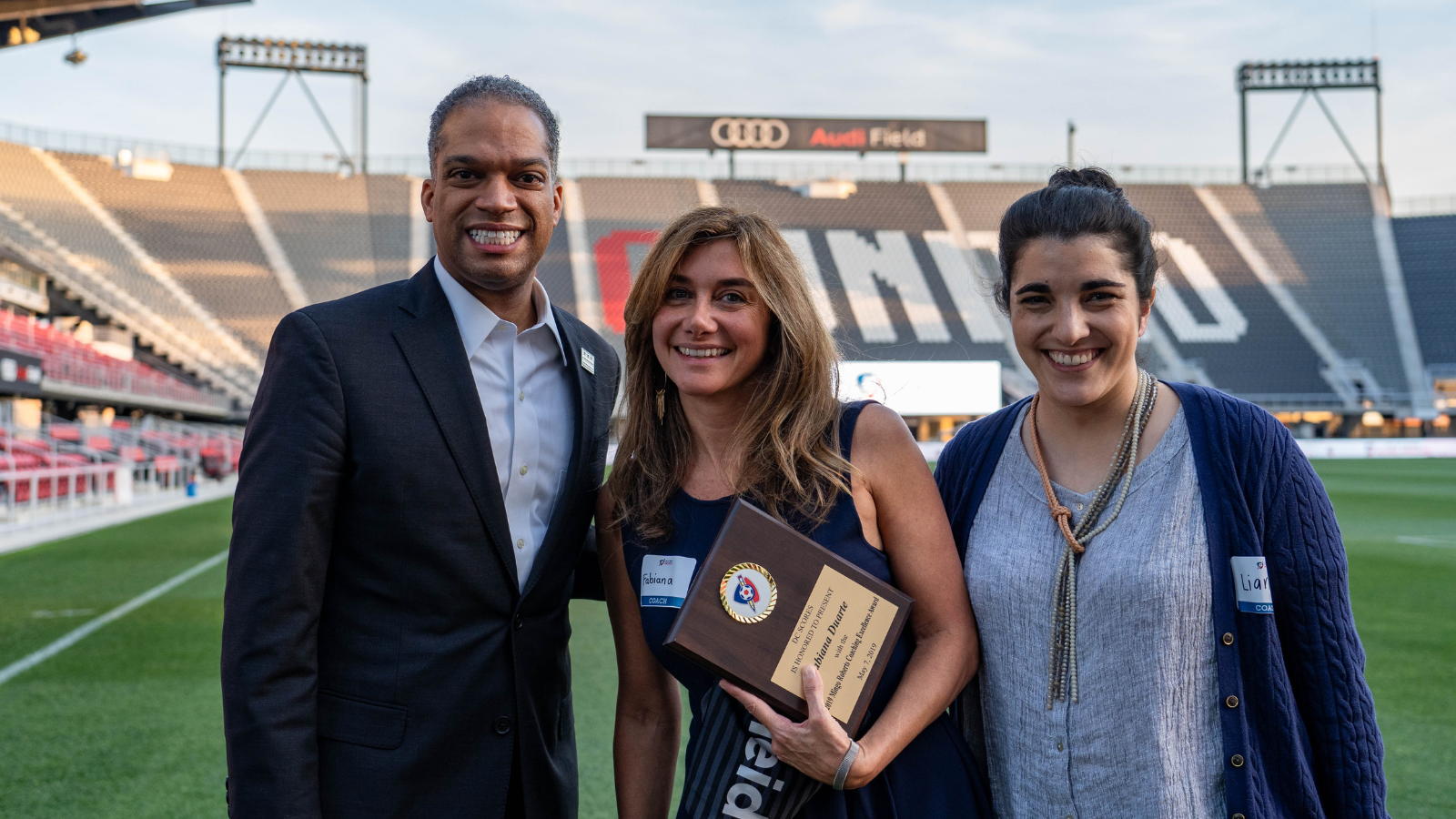 Soccer might bring poet-athletes into the program, but Duarte believes that it’s at the DC SCORES poetry sessions that students really get the chance to shine.

The team practices poetry in the school lobby and auditorium, which means the whole community can watch them perform in the lead-up to slams. “The whole staff watches the kids rehearse and cheer for them, give them feedback,” says Duarte.

“It’s very valuable for their life experience,” she adds. “So many people are afraid of public speaking. Getting on a stage, the [students are] nervous, they are afraid. But they do their thing and they conquer their fear and they perform.”

In recent years, as educators direct every hour of schooltime to curriculum learning that children missed out on during COVID-19 lockdowns, Duarte says that extracurricular activities have drastically decreased during the school day. “Our school is not able to set aside hours on end for students to practice to put on something like a play, so the poetry slam is very important,” she explains.

DC SCORES is the only city-wide program that offers arts, performance, and sports programming at no cost to children or their families. Duarte admits that, during the extreme upheaval of the pandemic, she was “afraid that good things like DC SCORES will go away.” However, the resilience of the organization in not only weathering the crisis but expanding into new schools reassured her that the organization is “here to stay.” 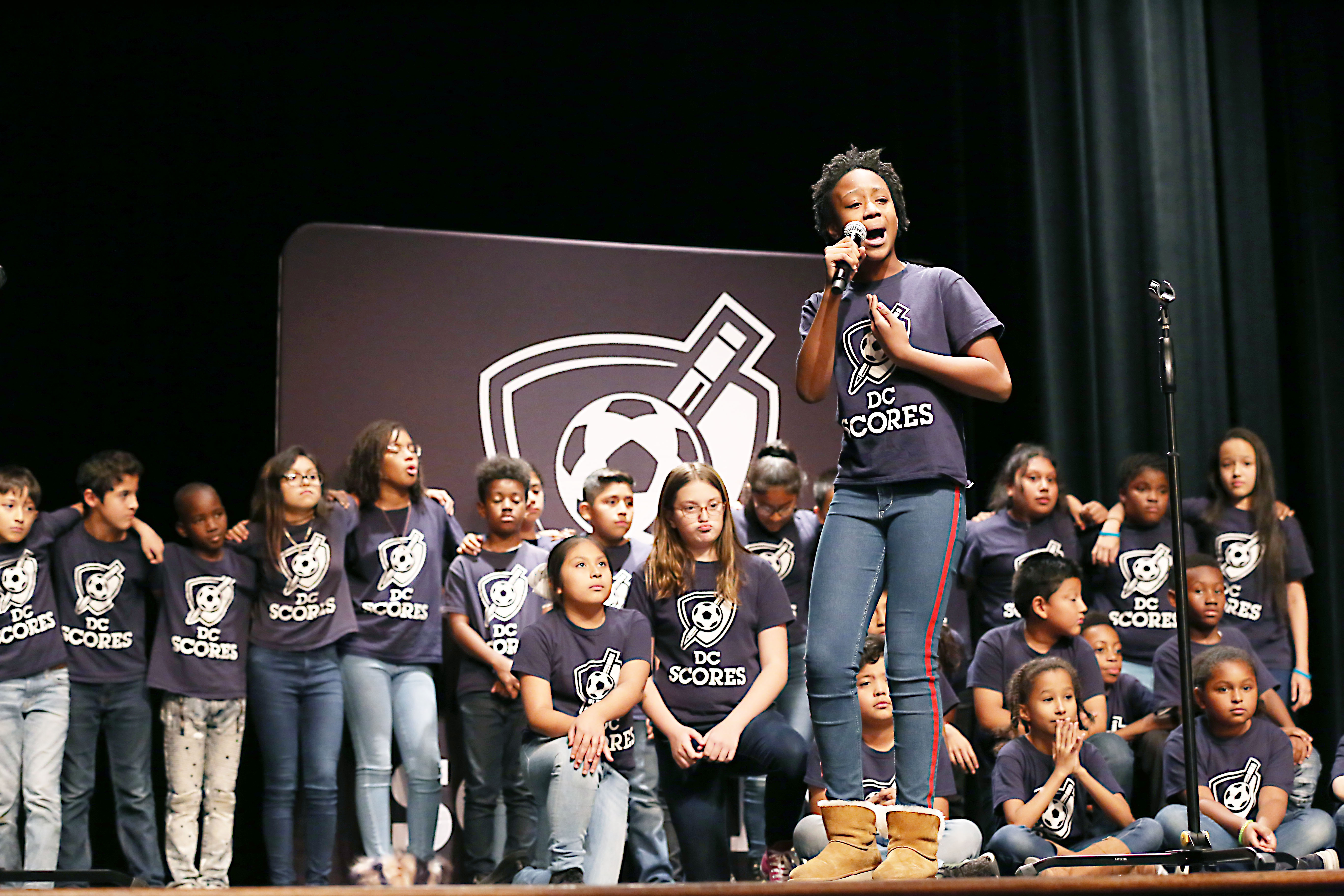 “A valuable life experience”: Duarte says that DC SCORES poetry slams help Seaton students build confidence and learn to speak up about issues in their communities.

Now, as Duarte and her colleagues prepare their team for the first in-person DC SCORES poetry slam since the pandemic began, she is optimistic about the future of the program. In fact, just as she does for her students, Duarte has set the bar high for what DC SCORES can accomplish.

“DC SCORES is a great organization that makes really amazing memories,” she says. “Kids learn to see past their differences in age, gender, and language and learn to work together for a common purpose.”

She pauses and laughs before concluding, “I really think that if there were more activities, more clubs that could do what DC SCORES does, there would be world peace!”