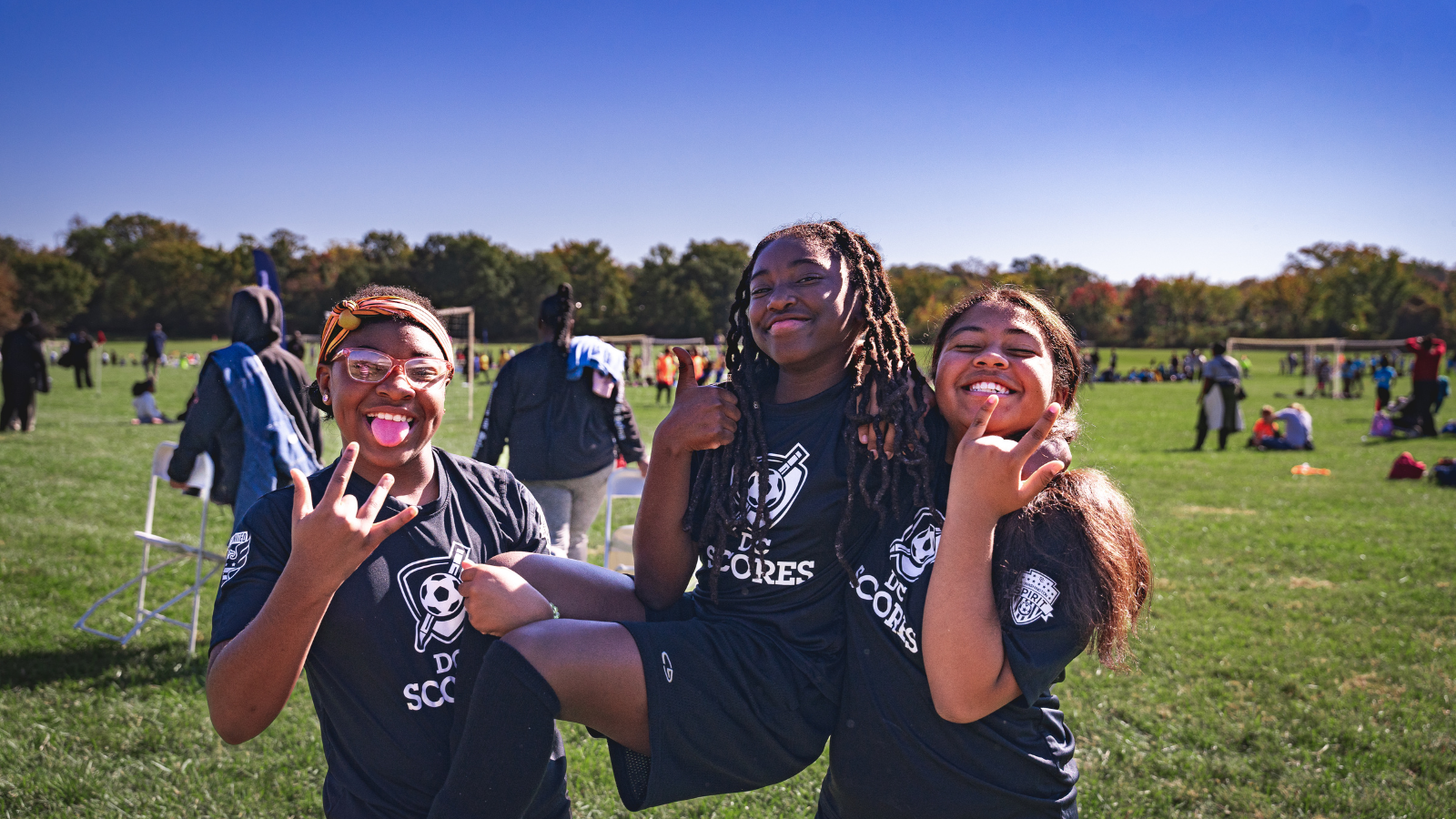 Fans of the sport know that fall is always an exciting highlight of the soccer calendar and the DC SCORES schedule is no exception. Last week, the organization hosted its annual Junior SCORES and Elementary SCORES Fall Frenzies, which hosted more than 2,000 poet-athletes and their families for a combination of soccer tournaments and community activities.

The events, which were held on October 19 and 22, respectively, were supported by a large contingent of volunteers and DC SCORES coaches whose efforts in event set-up, activity management, and game facilitation ensured that all participants had a memorable experience.

“While DC SCORES directly serves school-age kids, we also have deep roots in the wider community,” said Katrina Owens, Executive Director of DC SCORES. “Many of our coaches and family members are former SCORES poet-athletes and it was wonderful to see so many generations of our community come together for our Fall Frenzy events.” 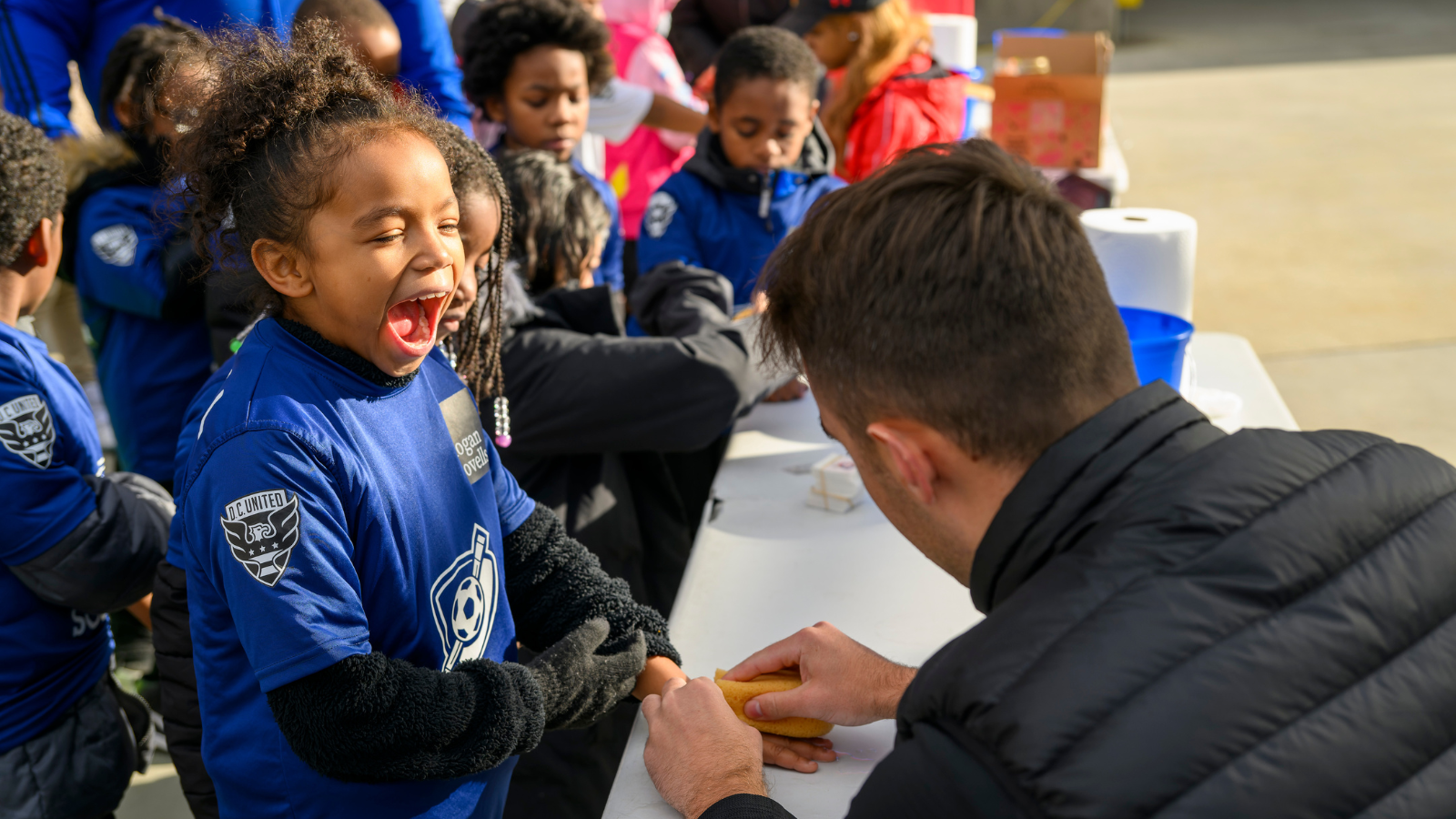 Teams faced off against each another in games across eight fields set up on the stadium turf. Just like regular season Junior SCORES matches, the matches adopted a continuous style, where play time is maximized by eliminating corners, throw-ins, minor foul free kicks, and other rules that contribute to stoppage time.

Games were facilitated by DC SCORES staff, volunteers, and coaches, who served as field marshals and educated players on components of the sport during gameplay. Family members were also invited to join in the fun as supporters and enthusiastically cheered on the teams from the stands. 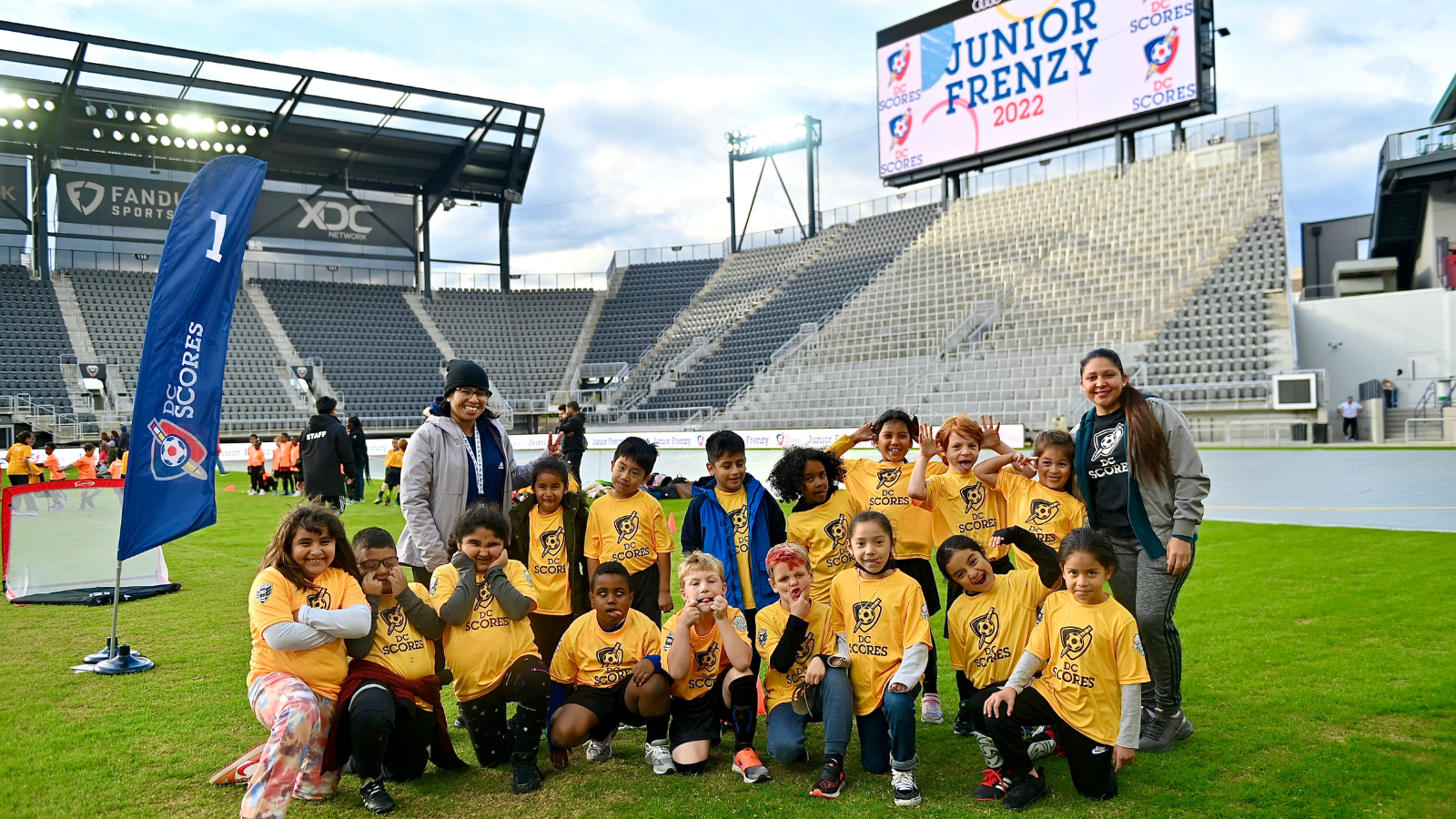 In addition to soccer, teams had the opportunity to get a headstart on their Halloween costumes at the event’s spooky mask making booth, which was part of an activities itinerary that also included bounce houses and a temporary tattoo station. A team photo under the Audi Field jumbotron — which featured DC SCORES branding — provided the finishing touch for the afternoon.

“It was great to give our Junior SCORES poet-athletes a fun-filled event where kids from different sides of the city were able to play against each other and take part in fun activities,” said Jewel Christian, Associate Program Manager for Junior SCORES, who served as the event’s lead for DC SCORES. “We’re always excited about growing Junior Frenzy as we register new schools, and I’m looking forward to even more parent and community engagement in the coming years.”

Soccer and Fun Along the Anacostia River 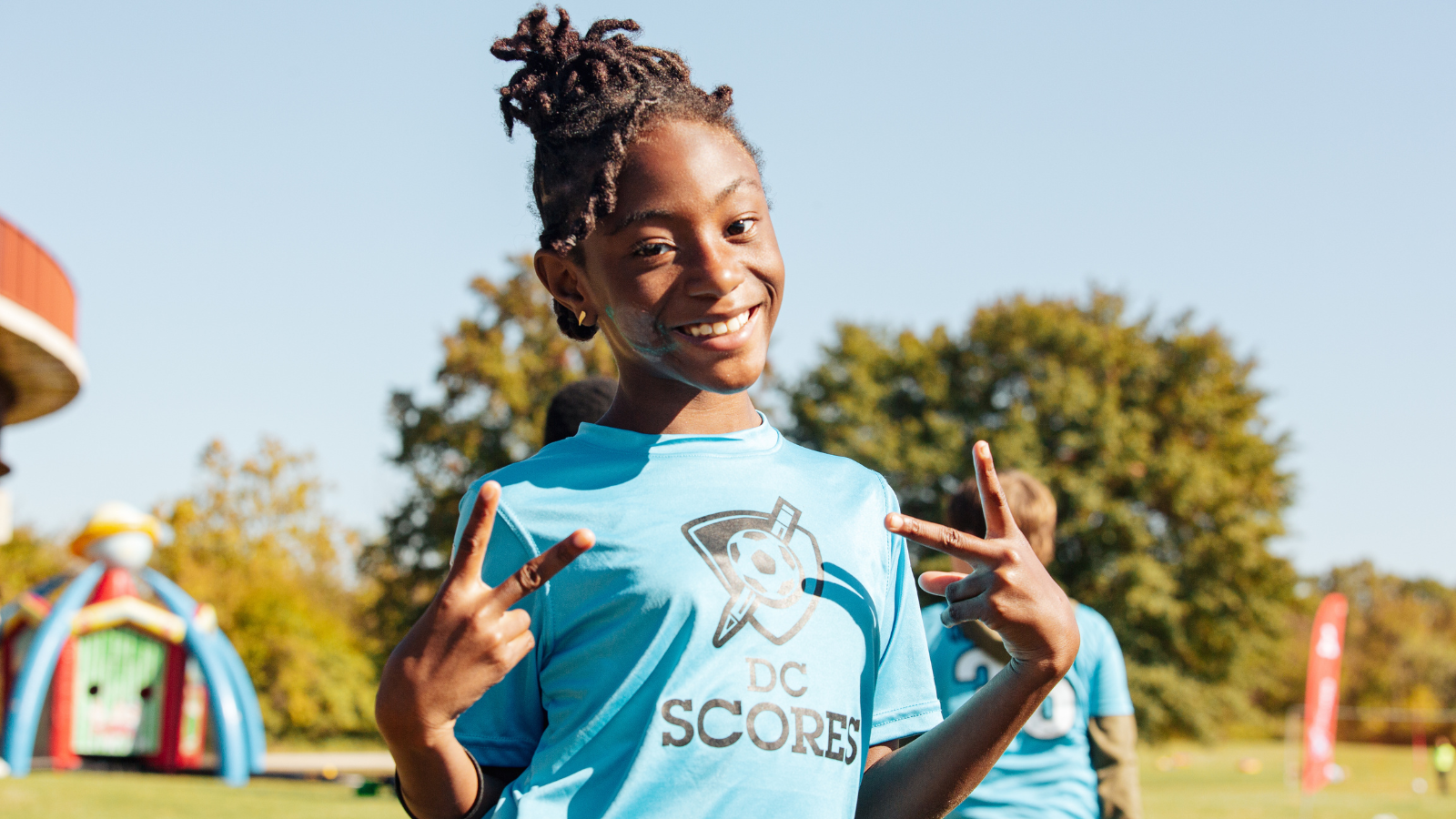 The week’s soccer festivities continued on October 22, with Fall Frenzy — a jampacked day of soccer, inflatable games, skills clinics, and poetry workshops held at Anacostia Park. Supported by over 70 volunteers, the community festival brought more than 1,200 elementary school students and hundreds of family members to the riverside recreation center.

Staff and volunteers arriving at dawn for set up were greeted by a chill breeze, but soon warmed up when the sun emerged just as Chief Operations Officer Sean Hinkle led the crowd in the organization’s iconic “DC? SCORES!” call-and-response chant. 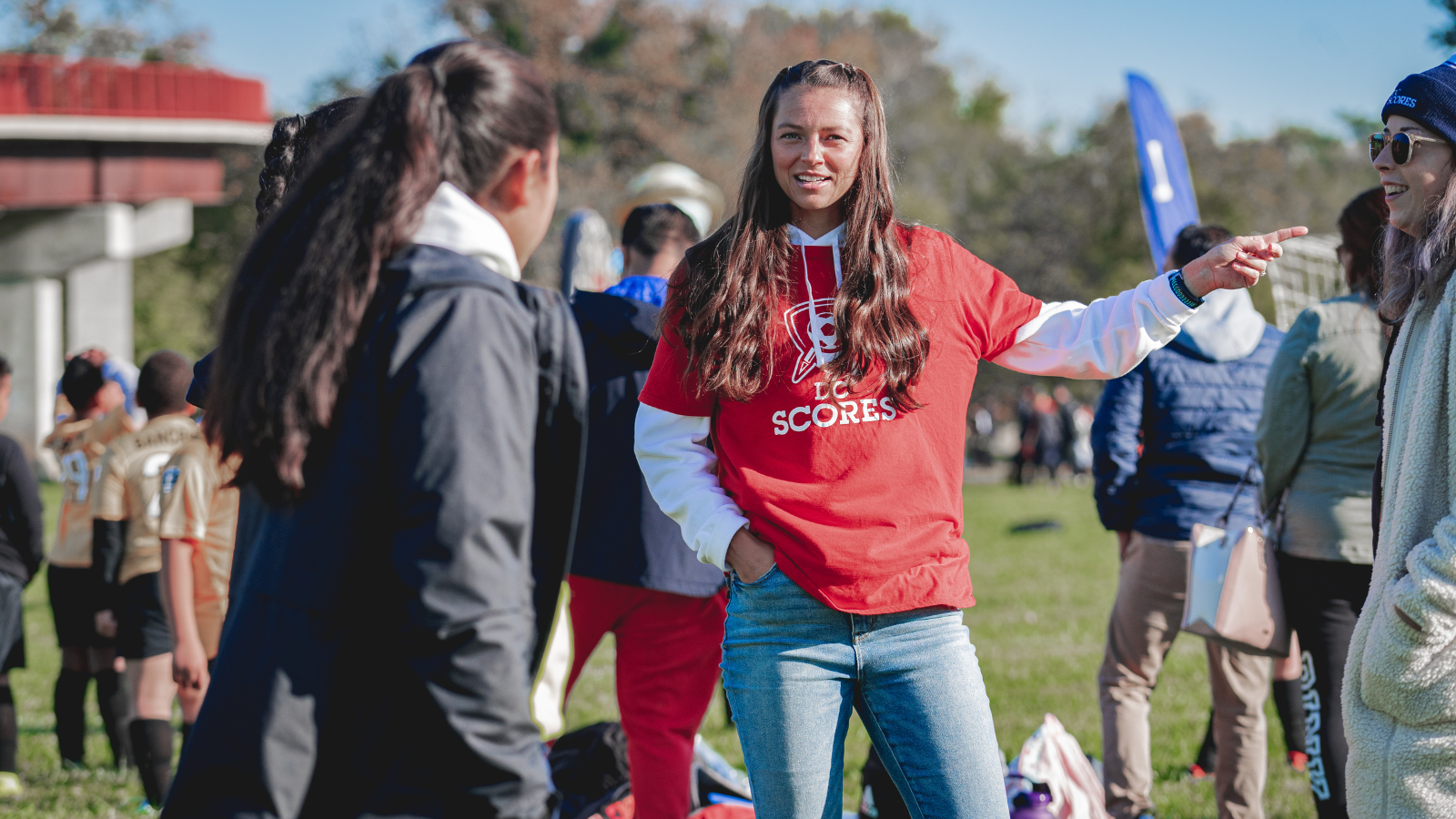 Professional players from the Washington Spirit including Ashley Hatch volunteered as referees and met with poet-athletes. Photo: Neil Chhabra

Participating teams played in more than 200 40-minutes matches and were supported by groups of families and volunteers, many of whom came decked out in school spirit gear. Some lucky squads were greeted at the field by surprise VIP referees: Washington Spirit stars Ashley Hatch, Gaby Vincent, and Anna Heilferty! In addition to volunteering at the event, the NWSL players donated soccer cleats to poet-athletes from Bancroft and Leckie elementary schools through the Boots from Pros initiative.

“Having the community be there for our poet-athletes, including professionals from the Washington Spirit, helped make this event special and inspiring for everyone involved,” said Jason Gross, Senior Director of Soccer and Operations at DC SCORES. “It was amazing to watch our families, volunteers, and staff come together to celebrate and support our poet-athletes while they smiled, laughed, and competed in our Fall Frenzy festival.”

Between matches, poet-athletes visited the activity booths, where they created original poetry, competed in inflatable football and baseball games, honed their dribbling and shooting skills at soccer clinic stations, and ran relay races. At lunchtime, poet-athletes showed off their team spirit with mascot-themed face painting and broke out their best dance moves at the DJ booth. 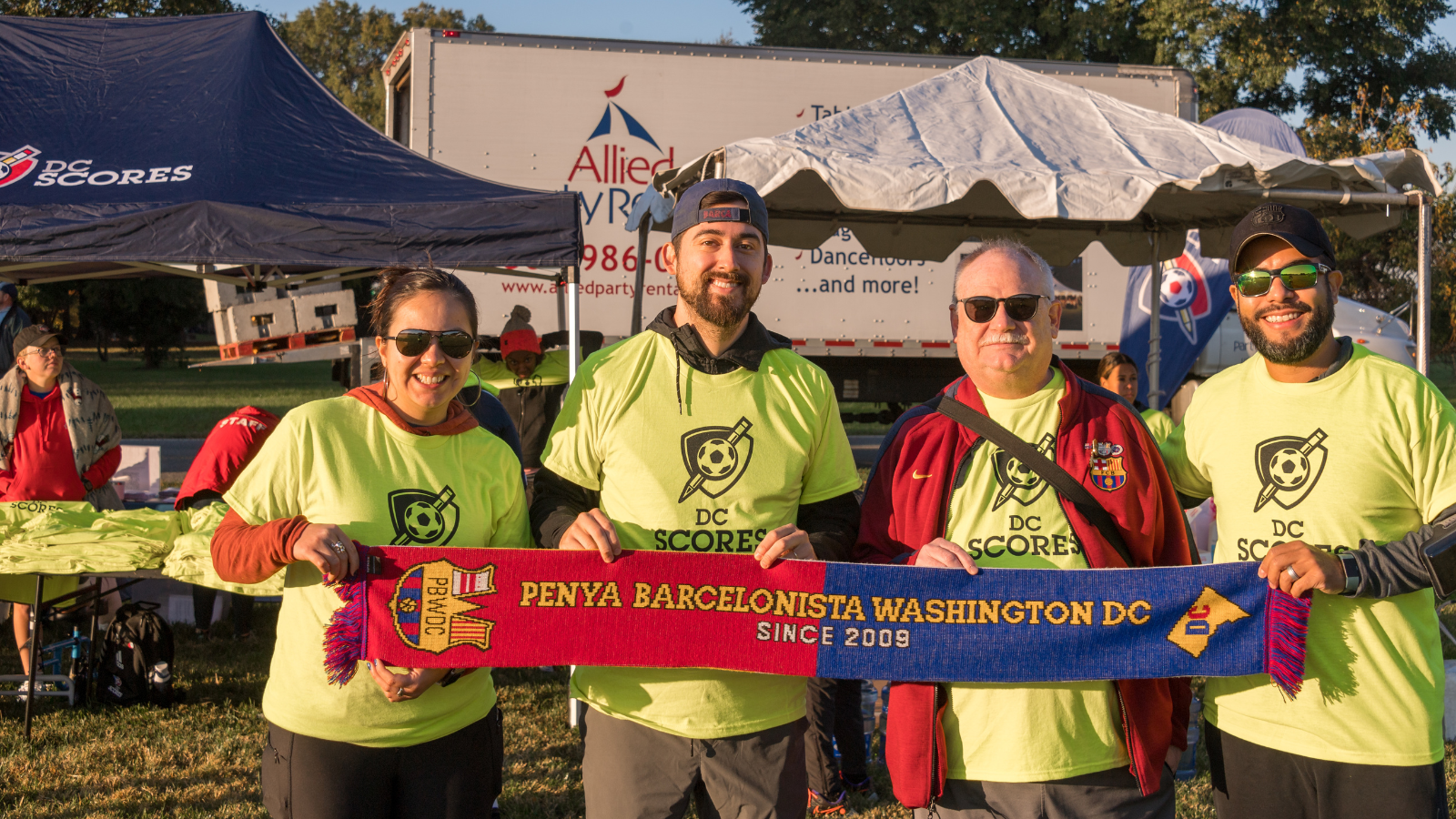 “None of this would have been possible without the incredible support of our volunteers,” said Gross. Drawn from a range of DC SCORES partners across the District, volunteers assisted at every stage of the event including set-up, check-in, refereeing, and clear-up.

“DC SCORES is more than just an organization; we’re a community,” said Owens. “Our Fall Frenzy events are the perfect example of how much our work relies on staff, coaches, partners, family members, and volunteers coming together to support poet-athletes.”

“So many of our kids and supporters tell me that our Fall Frenzies are their favorite DC SCORES events,” she added. “Watching our poet-athletes celebrating their wins with their families and having fun in a safe and no-cost community event, it’s not hard to see why.”

Coach Fabiana Duarte Explains How Diversity, Determination, and DC SCORES is Paying Off for District Kids