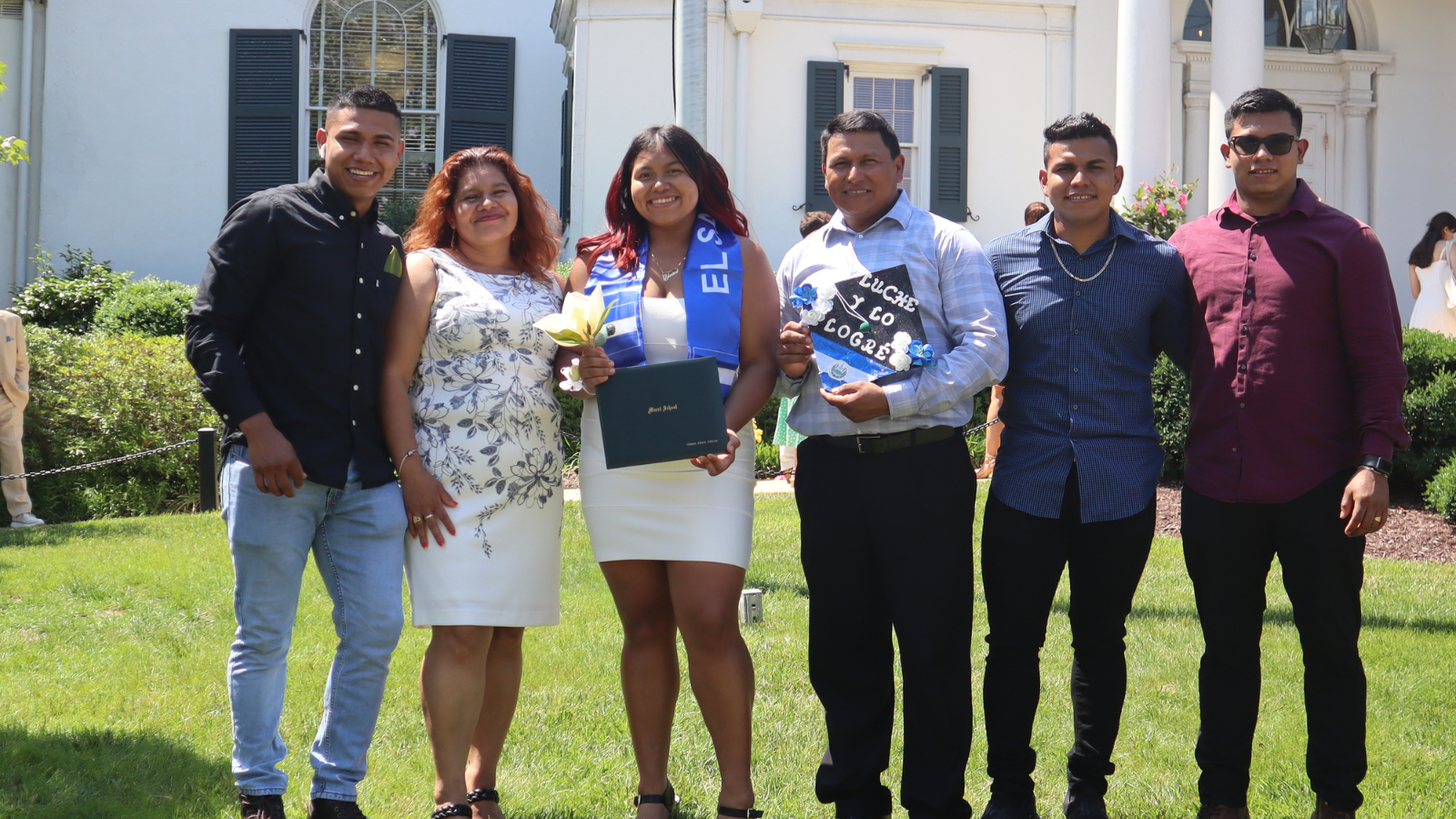 Chicas has just begun her first semester at Lafayette College as a Posse Scholar.

In November 2016, Yanina Chicas stepped up to the mic for her first-ever poetry slam performance.

Then a 7th-grader at Lincoln Middle School, Chicas was asked by her coaches to give a solo performance at the annual DC SCORES West Side Slam. She had signed up to DC SCORES earlier that semester because she enjoyed playing soccer, but admits that she hadn’t given much thought to the poetry component of the organization’s award-winning program. “I was like, ‘Hmmm…should I really be writing poems?’” she recalls.

Yet, when she performed her piece “Faded” — delivered from the perspective of a young girl facing challenges in her life — the audience was captivated. Later that evening, she won the Shine Award, an annual prize presented to the standout solo performer at each DC SCORES poetry slam.

“I was like, ‘What? I can really do something!” Chicas remembers. “So, I started DC SCORES there, and I pretty much haven’t left.”

“Poetry Has Seen Me Grow Up”

These days, poetry comes more easily to Chicas. “It’s like a light bulb that just turns on and it’s time to write,” she explains.

Last month, the DC SCORES alumna began her first year at Lafayette College, which she is attending as a recipient of the prestigious Posse Scholarship, a full tuition merit scholarship awarded to students from diverse backgrounds who possess extraordinary leadership potential.

Throughout her journey to college, Chicas has relied on poetry to help her navigate the world as a first-generation Salvadorean-American and woman of color. “Poetry has seen me grow up and I have seen my poetry grow up,” she says.

As a child, Chicas always enjoyed journaling, writing her thoughts and day-to-day experiences in a private diary. But when Donald Trump ran for president on an anti-immigration platform, Chicas felt compelled to express her hopes, fears, and frustrations more publicly. “I wanted to share my story,” she says. “DC SCORES gave me that space.”

In their DC SCORES poetry workshops, Chicas and her classmates wrote about the political issues impacting their lives: aggressive new immigration policies, the gentrification pricing their families out of their neighborhoods, and the uptick in racist violence that came in the wake of Trump’s victory.

The students’ goal, Chicas says, was to raise awareness of the problems they would inherit as young DC residents, even if it meant tackling difficult subjects.

When she was in 9th grade, Chicas participated in Our Words Our City, a poetry showcase where DC SCORES poet-athletes perform original work alongside professional spoken word artists. Her piece, “Seven Years,” described the devastating impact of a family member’s sexual abuse.

“I was a 14-year-old talking about sexual assault in front of people who are way older than me,” she recalls. “All I wanted was for people to know and hear and listen. This is what poetry does, it makes you feel.” 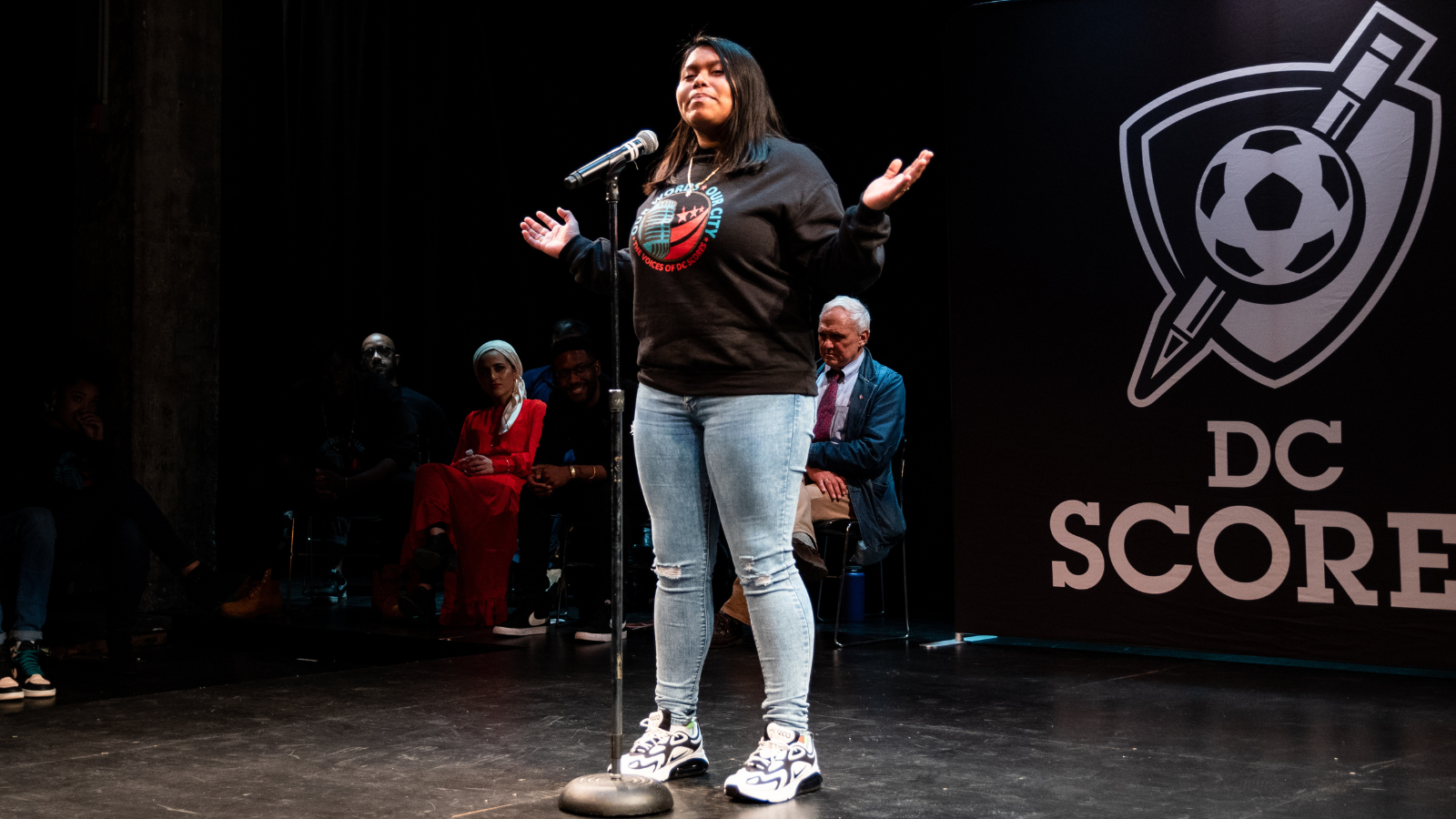 The Power of Language

For Chicas, poetry’s raw, emotional impact makes it the perfect medium to delve into complex topics, including thorny questions about cultural identity.

“I’m very, very, very proud of my culture,” she says, gesturing to the Salvadorean flag that she hung up in her dorm room the moment she moved in. However, she says, her fierce love for her heritage does not stop her from exploring challenging questions posed by her Latinx identity.

“I definitely have to juggle with race,” she explains, “because, like a lot of Hispanic and Latinx folks, I don’t really have a race. We just have an ethnicity. It’s very hard to talk about.”

“[Through my work] I travel through the different parts of my racial identity, be that the Indigenous or the European side,” she continues. “Although I’m not fully connected to my Indigenous side, I recognize that there are people before me, my ancestors, who have shaped the way I look, the color of my skin, and — who knows — maybe the way I talk and advocate for myself.”

Grappling with her Indigeneity is further complicated by the languages Chicas uses in her poems. She deploys both English and Spanish in her work, switching between the two for maximum impact. In her piece “Español,” Chicas praises the poetic dynamism of Spanish, telling her listener that “everything sounds more powerful” when she speaks it.

However, she acknowledges that this power is problematized by the historic spread of Spanish across Latin America as the language of the conquistadors, soldiers who brutally brought the region’s lands and peoples under Spain’s imperial control. By using Spanish to celebrate her own heritage, which can be traced back to those early colonized communities, Chicas hopes to transform the language from a tool of subjugation into one of liberation.

“I am using my colonizer’s language, but at the same time, it’s what I know as Spanish, not what people from Spain know as Spanish,” she explains. “It’s a reclamation for everything. We are reclaiming what was once very oppressive.” 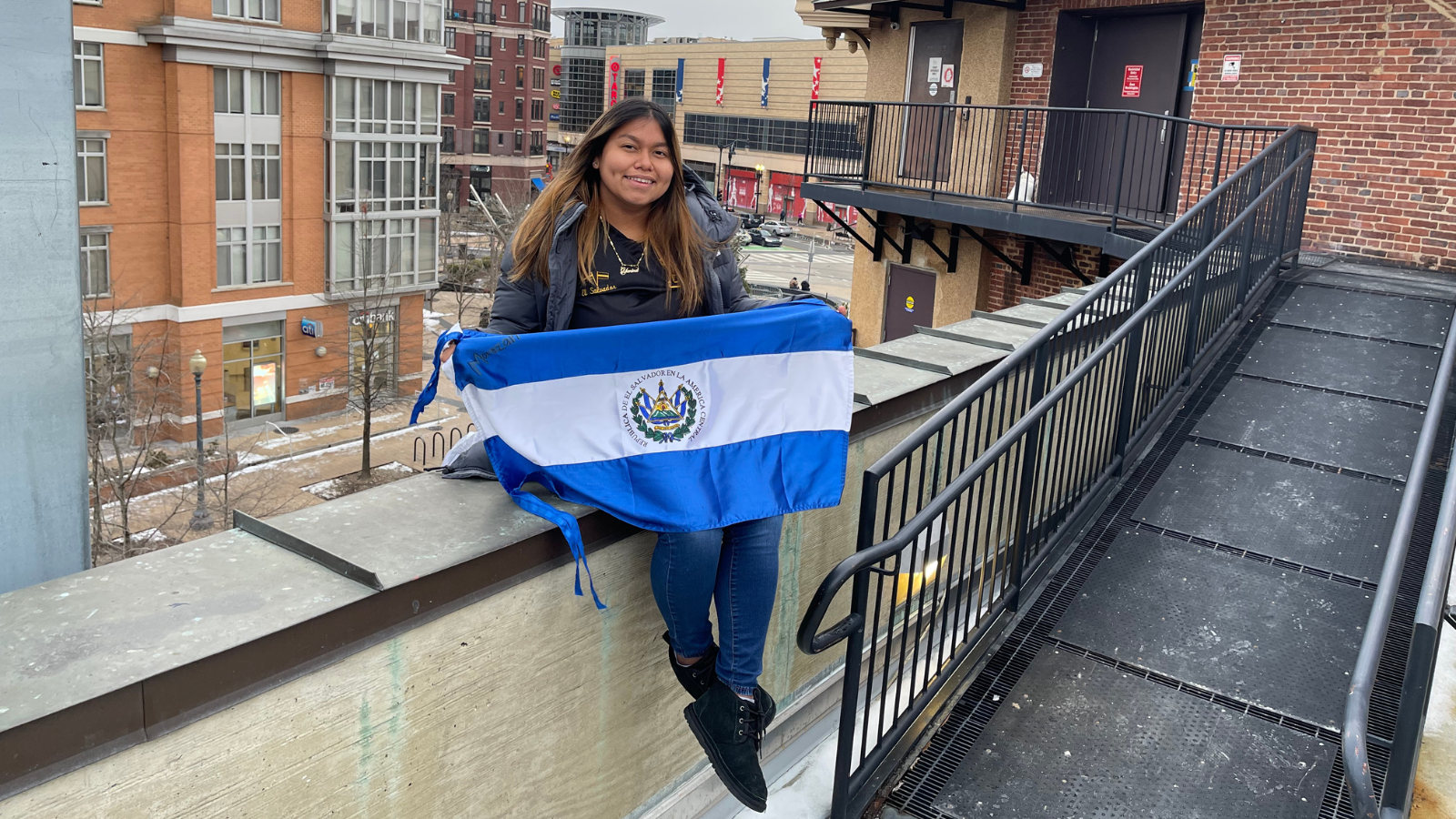 Chicas in her home neighborhood of Columbia Heights, which has been the site of rapid gentrification in recent decades.

“We Built This Space”

This spirit of perseverance is one that Chicas says her family and friends in DC have had to increasingly rely upon in recent years as they have weathered the Trump administration, the COVID-19 pandemic, and the gentrification of their neighborhoods.

Chicas grew up in Columbia Heights, an area of DC long populated by Black and Latinx communities but which, since the 1990s, has seen an influx of white, wealthy residents who have priced out low-income people of color.

“I wish other DC residents — specifically white people who are coming and gentrifying our areas — understood that we built this space,” Chicas says, referring to her friends and neighbors who sustained Columbia Heights before the big developers moved in. “This is a community that’s breaking up and it’s been hard to bring unity back.”

However, despite the challenges faced by Latinx people in DC and across the country, Chicas says she can always rely on members of her community for support, even in unlikely places. Less than 8% of students at Lafayette are Latinx, but just weeks into her first semester, she says, she has been able to meet up with other Salvadoreans and “feel a sense of community.”

Her DC SCORES background has helped her make connections, too. She will be playing soccer in an upcoming fundraising tournament for the Hispanic Society of Lafayette and she has plans to perform her poetry for fellow students soon.

Looking to the future, Chicas hopes to pursue a career as a social worker after college and to establish an educational nonprofit serving young people in El Salvador. “I want to see change in the world,” she says. As she reflects on the journey that began when she first stood in front of that microphone in 2016, she shares some words of encouragement for other DC SCORES poet-athletes looking to find their way in the world: “My advice is to take that pen, that pencil, and write.” 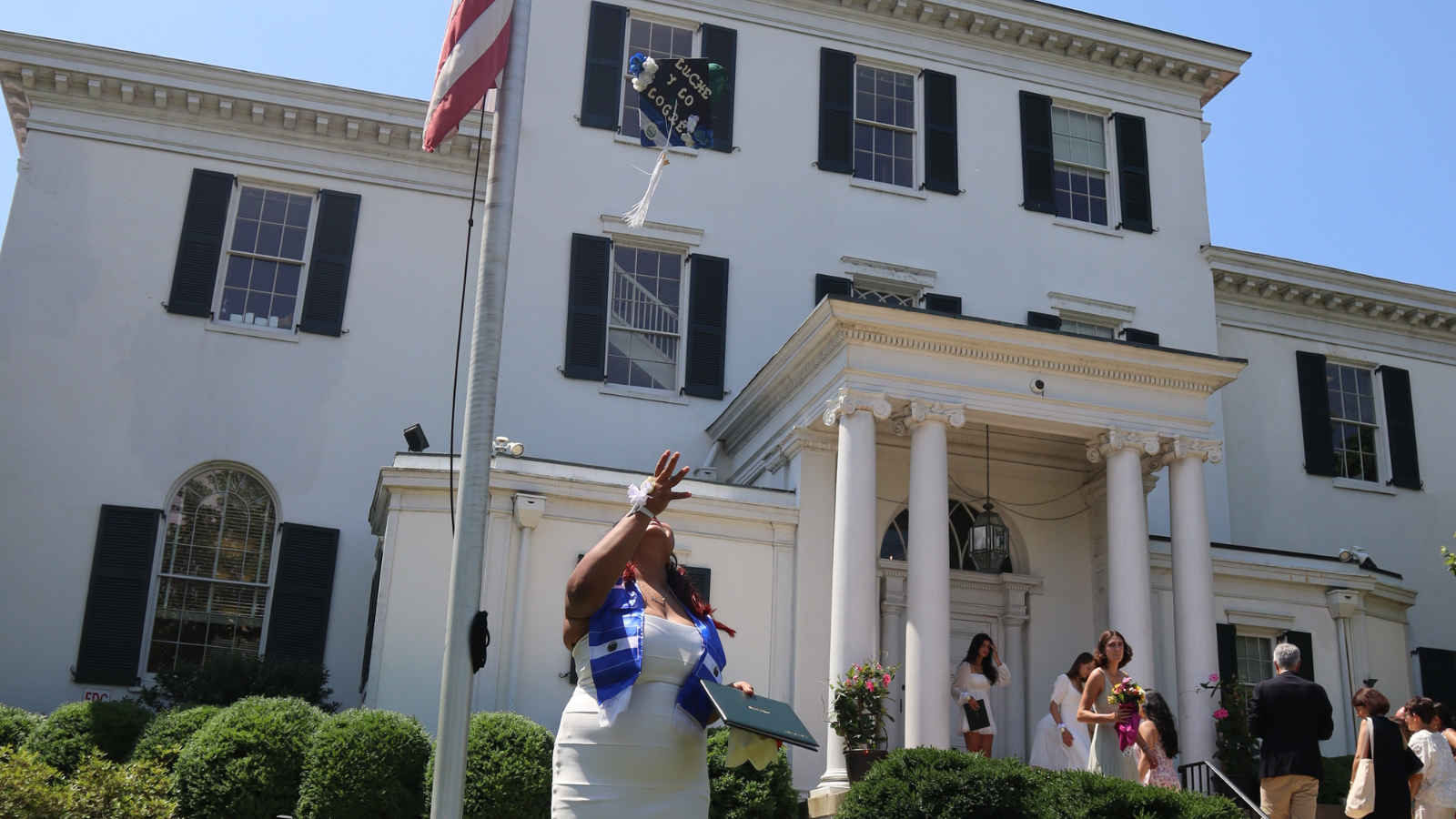 After she graduates college, Chicas hopes to become a social worker and found an educational nonprofit serving young people in El Salvador.

“Maybe I Can Do This, Too”: Teaching Artist Tatiana Figueroa Ramírez Draws on Her Afro-Latinx Identity to Inspire DC Kids