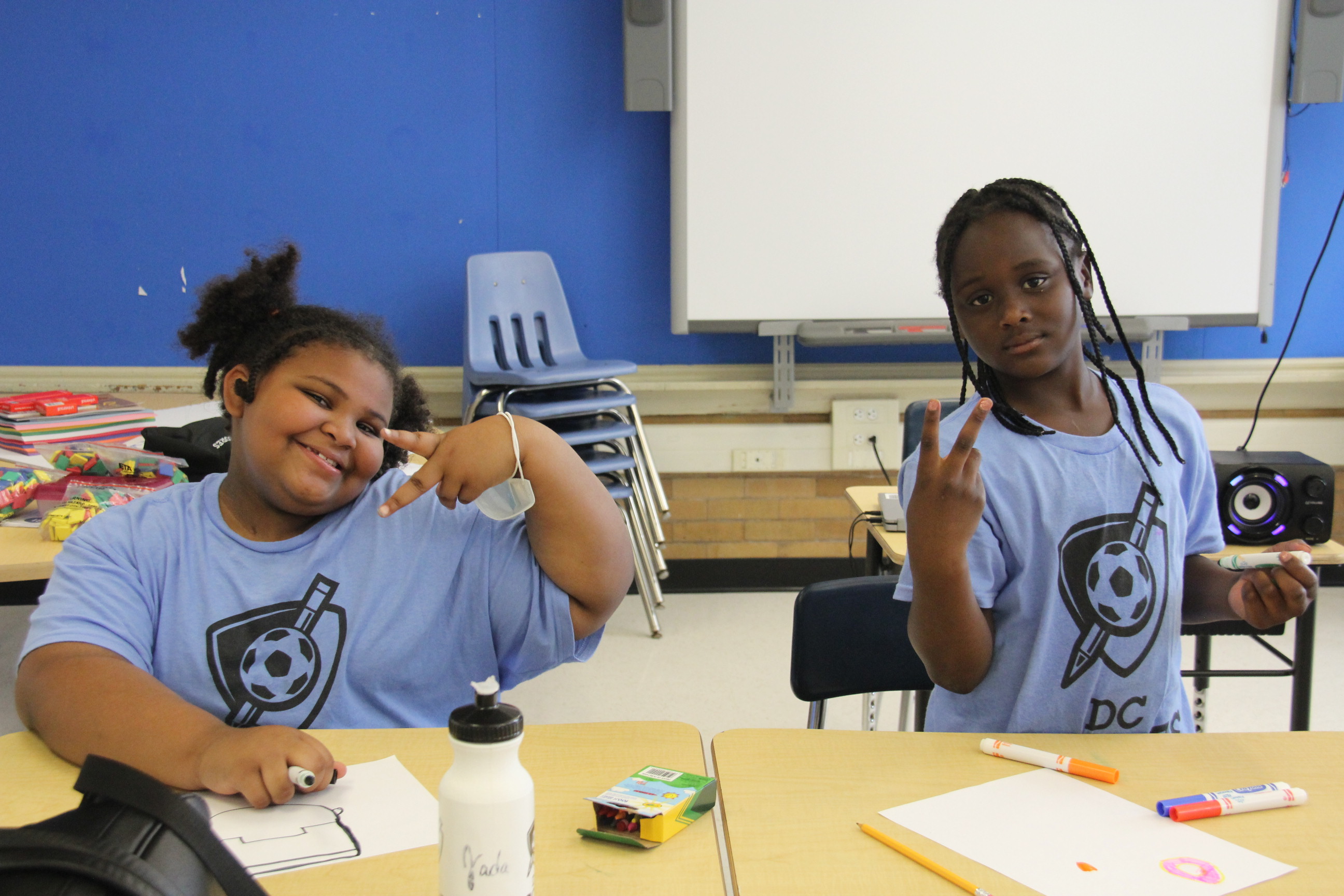 School may be out, but our poet-athletes’ hard work and fun won’t stop this July as they attend DC SCORES summer camp. Locations at Brightwood and Burville are providing STEAM and soccer coaching over 5 weeks, with field trips to some amazing places around the District.

Camp at Brightwood kicked off with campers receiving their soccer gear before heading to breakout groups to construct vision boards. This is where they can get creative and make a collage depicting their dreams and goals. Some of these day 1 dreams: becoming a NASA scientist, an archery champion, a professional dodgeball player, cartoon writer, and many more. Rain delayed the afternoon soccer activities, but the kids were introduced to this week’s focus skill: dribbling. 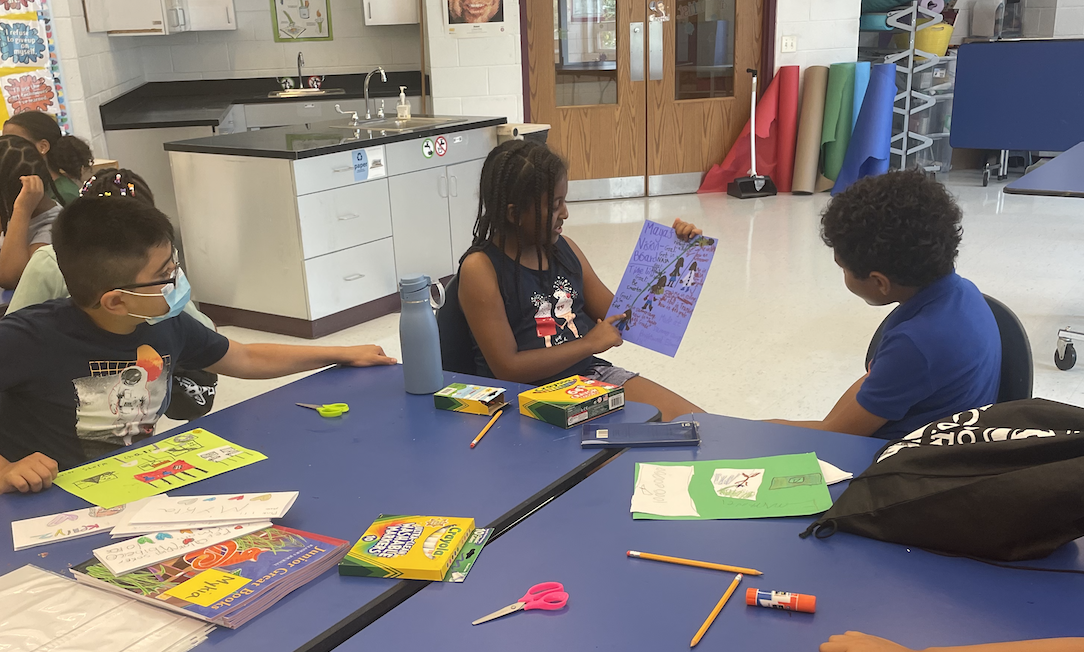 When the sun finally came out, so did the soccer! The kids were able to scrimmage and put their dribbling skills to the test against each other in Slalom Relays – the summer heat was there but so was the energy. Inside, the STEAM focus was shadow art. The kids used tricks of light to put a shadow of whatever they wanted onto paper and used their amazing art skills to decorate their shadow. 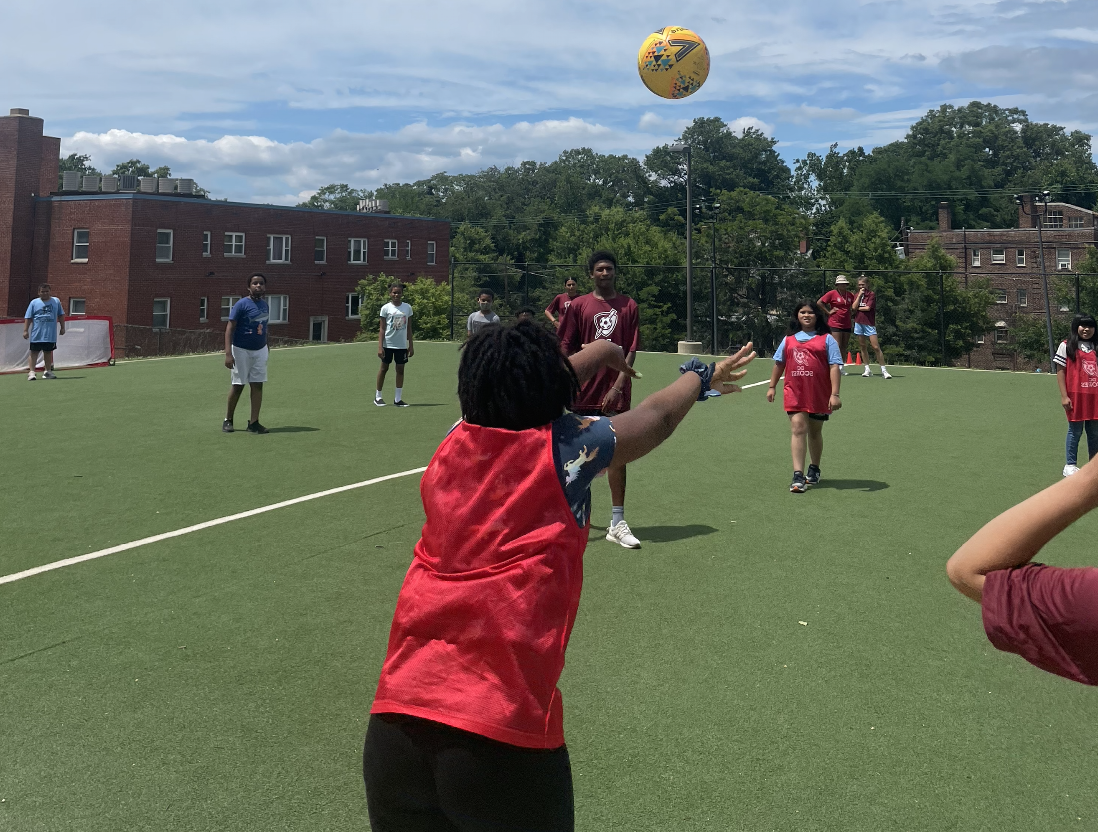 The kids became urban explorers when camp partner Forest Kids came in to shine a whole new light on the nature that surrounds us in the big city. Campers picked strawberries and blackberries, found insects on the ground or in the sky, learned about the importance of mushrooms, and more! 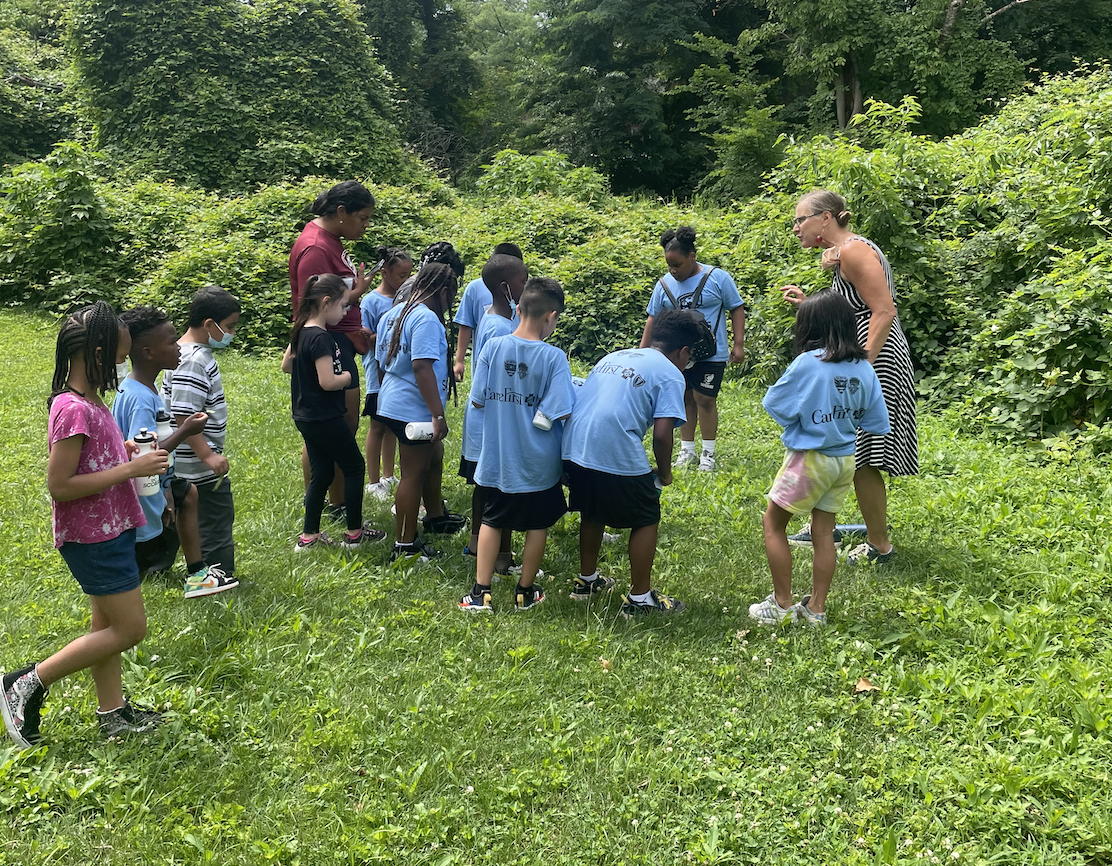 On the soccer side, campers put what they’ve been learning into practice against the coaches with a TikTok dribbling skills challenge. Using the inside and outside of their feet, a few were able to get by the coaches and score! Week 1 and 2 have gone smoothly, and with 3 left the only way is up. Trips in the coming weeks will teach the campers about soccer, solar energy, language, history and more.

Week 2 began with our campers (and counselors) designing their own DC SCORES tie dye shirts. The soccer focus this week was to learn the techniques behind passing – very appropriate after the arrival of expert Wayne Rooney as D.C. United manager. In fact, this week the campers went to Audi Field for some fun activities. Thanks to camp sponsor CareFirst, poet-athletes were able to discuss and draw their dream communities with an assist from D.C. United and CareFirst volunteers. They talked about the importance of caring for others, equal opportunities and using what they’ve learned from Forest Kids to recognize how nature can brighten a community. New Columbia Solar, the company that installed the stadium’s solar panel array, were also there to teach campers about solar energy, answer questions about the inner workings of solar panels and how solar is used at Audi Field. 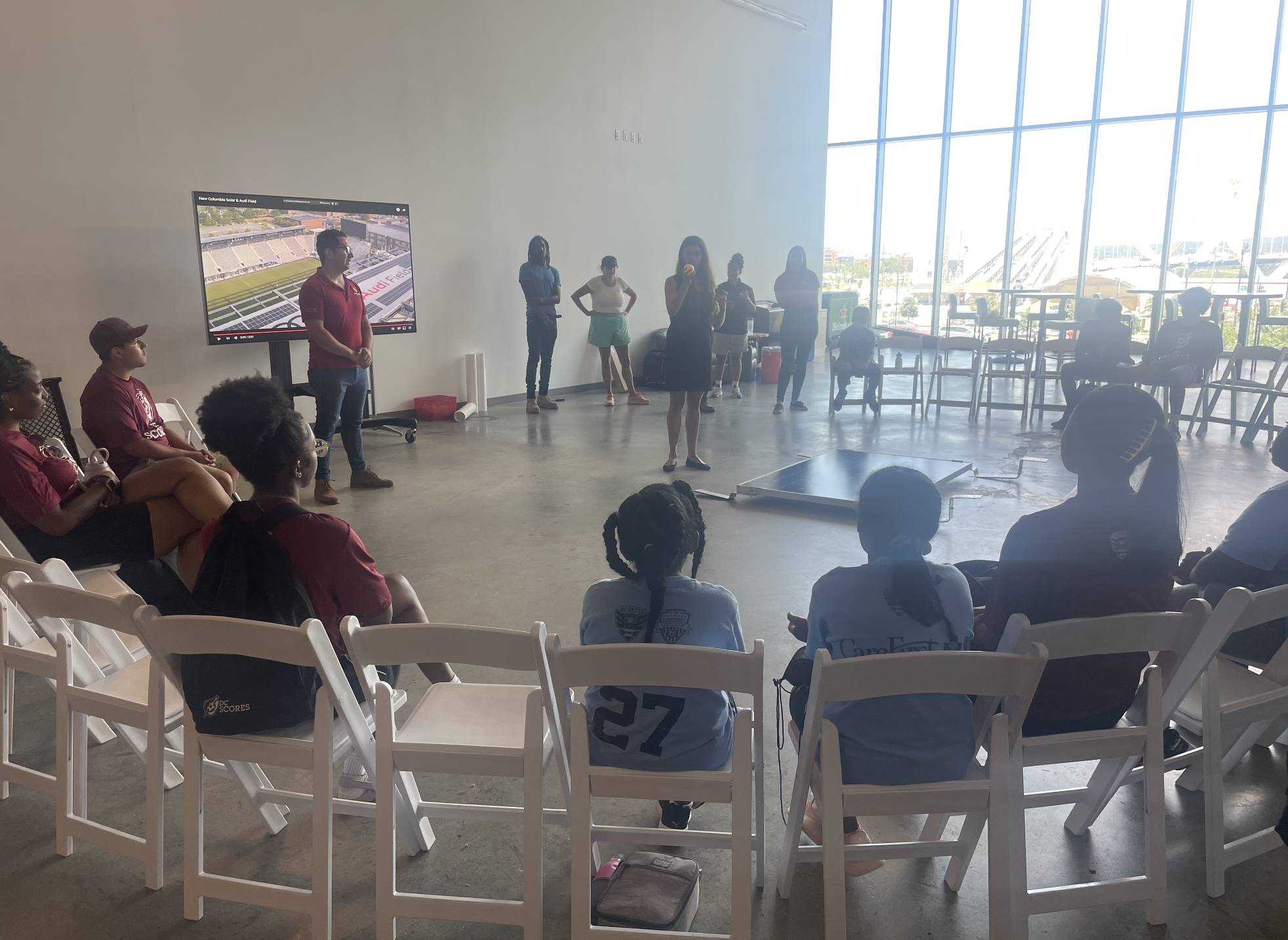 Forest Kids were back with a focus on birds and a special emphasis on what they eat and their importance in the food chain. After expending their energy running around Fort Stevens, the kids even got to hold an owl, a nuthatch and a hawk! The trips into nature have been a highlight for the campers, they have been an amazing outlet for exploration and creativity. 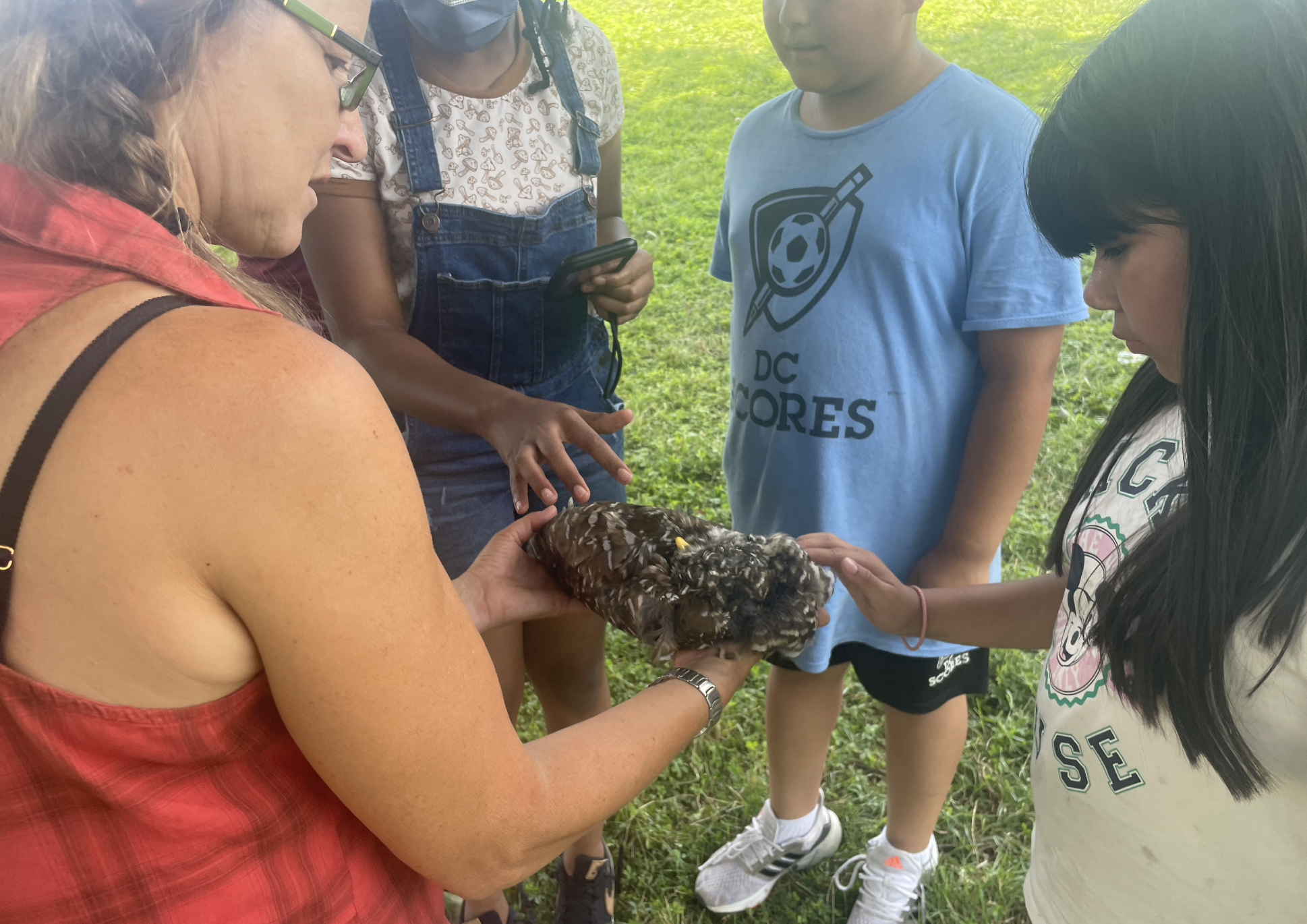