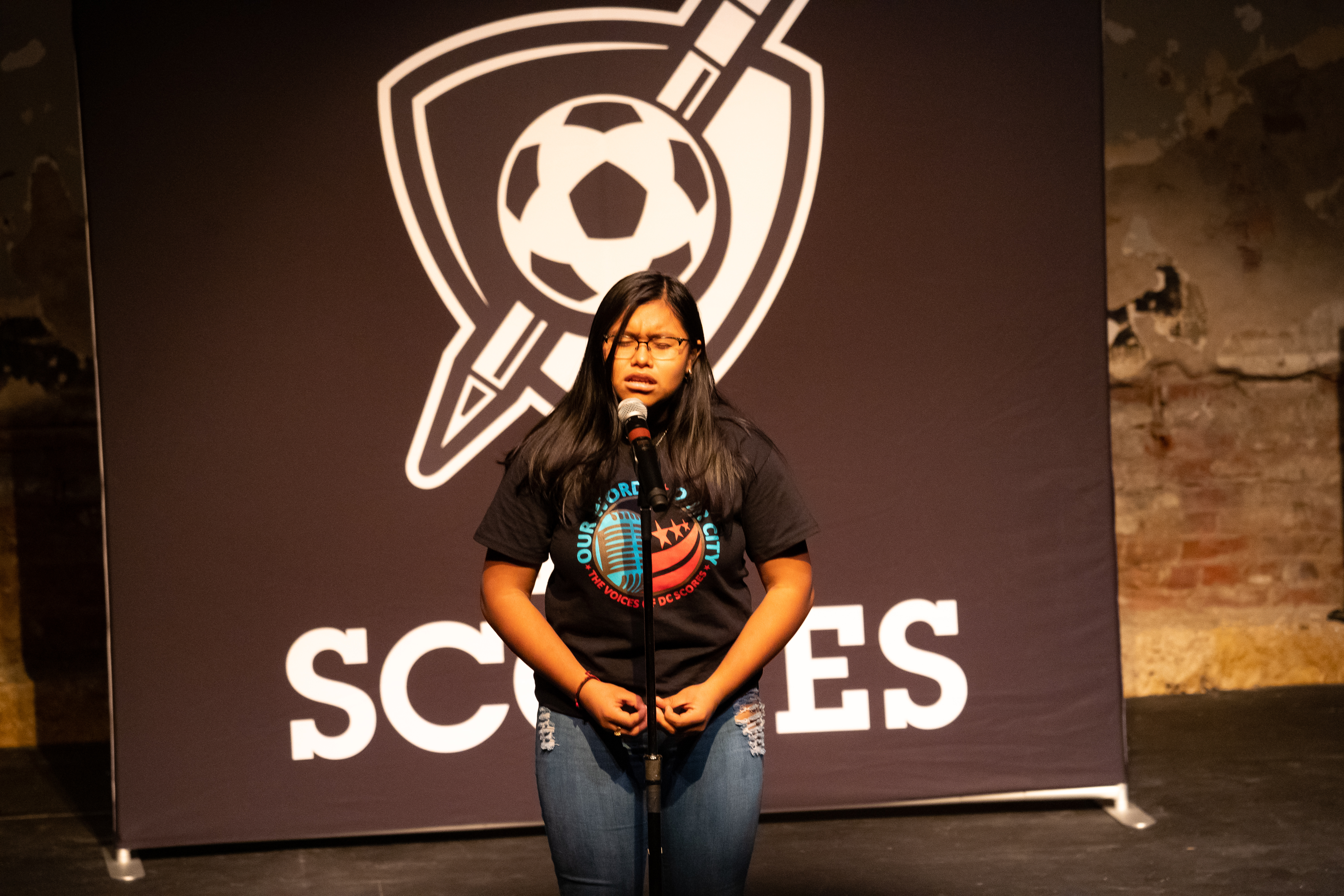 Yanina Chicas performing at the 2018 Our Words Our City Showcase

Yanina Chicas may only be 16, but the depth of her poetry extends well beyond her years. This charming, dimple faced young woman who radiates positivity, is definitely not afraid to talk about what really matters to her.

Placing her Latina heritage at the core of all her poetry and finding creative ways to express complex cultural issues, Yanina has found a way to navigate through her own identity struggle and give a voice to those that are experiencing a similar plight. Her Spanish laden poetry is vivacious, raw, and captivating, drawing her audience into her performance with every rhythmic beat.

(Spanish, one of the most universal languages
The language that helps me communicate with people from 33 countries
But why is there so much hate towards Spanish)

Yanina grew up in Columbia Heights, DC, as one of the only Latinx families in the neighborhood. As a daughter of Salvadoran immigrants, she was constantly told “You have to work hard and live up to the American Dream… Whatever that means right?” she sarcastically remarks. Although she is the youngest in her family, Yanina grew up faster than most. Early on she became the family’s language broker, straddling the English and Spanish speaking world for all of her family members, both linguistically and culturally.

The metaphorical “American Dream” is explored in her poetry as Yanina expresses moments and sentiments that her family was unable to as immigrants to this country. Through her poetry, she challenges the notion of what it means to be American and the cultural complexities at play as part of this first generation experience.

Her journey with DC SCORES started in the third grade at Tubman Elementary School, where she could be found kicking the soccer ball around the schoolyard with the boys. Her friends would constantly tell her that she should join DC SCORES as they provide free after school soccer, poetry and service learning programs. She was simply uninterested. 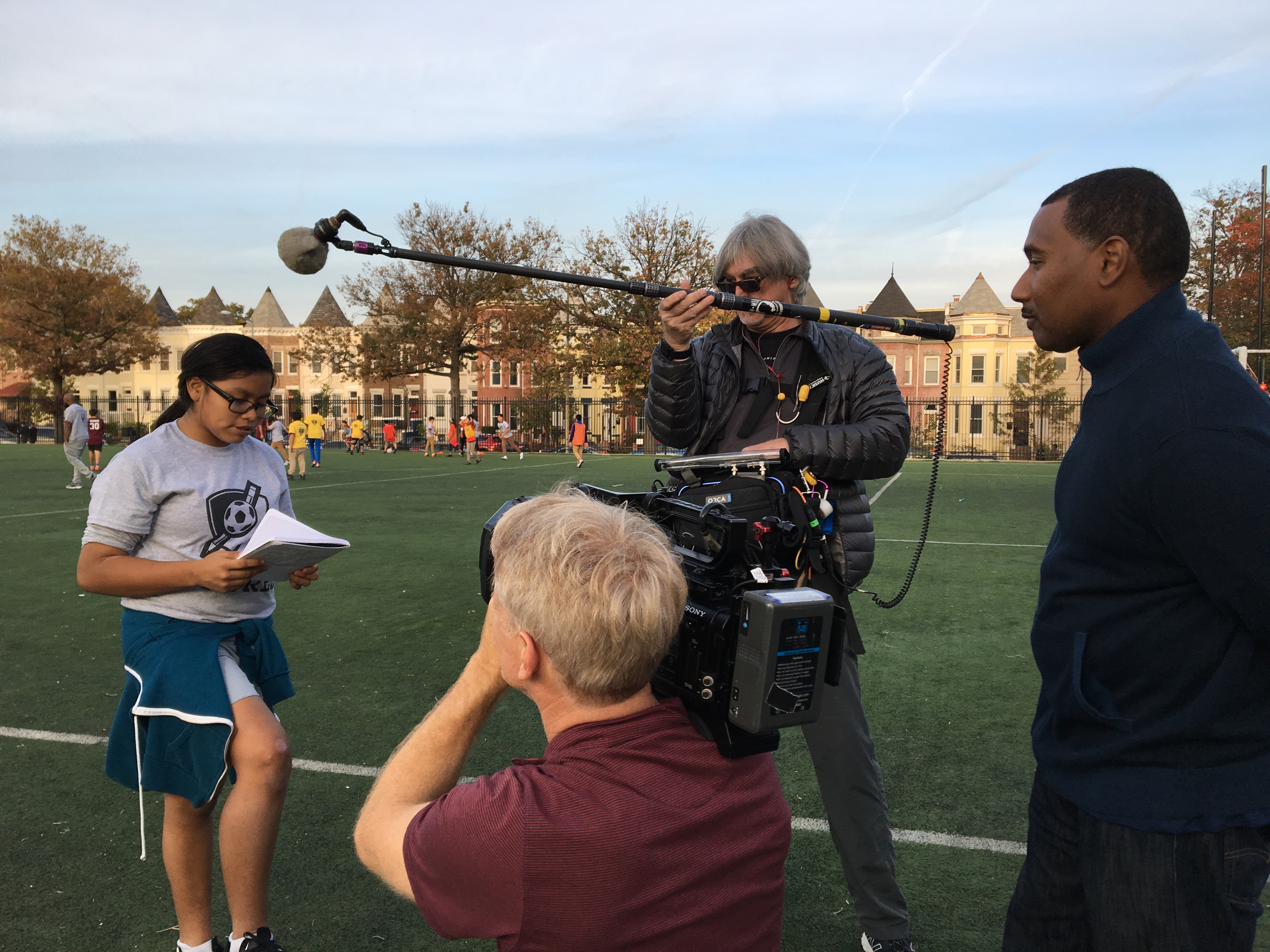 Yanina on the Tubman Elementary School soccer field during an interview

It was only in the 6th grade that she finally accepted what her friends were telling her. In the beginning, she joined for the soccer team. But in the end, she stayed for the poetry.

At first, poetry didn’t come naturally to Yanina. It was Coach Popsie, a revered DC SCORES coach at Lincoln Middle School, that made Yanina realize the power of her words.

Picture this: It’s the fall of 2016, Yanina Chicas is participating in her first DC SCORES Poetry Slam, which is a three evening event of spoken-word performances featuring original works by elementary and middle school poet-athletes from every DC SCORES site. Her poetry coach, Popsie, insists that she performs an individual poem. After much soul searching, contemplation, nerves, and self doubt, she performed her first ever solo piece. The performance was astounding, and she went on to win the very prestigious Shine Award.

The rest is history. She was hooked on poetry as a medium and DC SCORES as a home. It was that night that poetry became an elemental part of Yanina’s identity.

(Oh, everything sounds more powerful with Spanish
Even the scolding of our relatives
“Girl, you need to wash the dishes”
Even the criticisms of the aunts
“And when are you going to lose weight hun”
They are more painful than a thousand shots to the heart)

For the majority of Yanina’s life, she has been the voice for her family, especially her female family members who in difficult emotional situations, were often unable to communicate their true feelings as a result of language and social barriers.

The first performance where Yanina truly felt she had a voice and was being heard was at her first Our Words Our City, a live poetry showcase presented by DC SCORES. She performed a poem called ‘Seven Years’ (watch her performance on Amazon Prime), which was about sexual assault and harassment experienced by someone close to her. After looking back at the footage of her performance, where a cameraman caught a woman crying from her words, Yanina was moved. Her poetry made that happen. She realised then, her words and her voice held acute emotional power.

Yanina at the 2017 Westside Poetry Slam
Photographed by: Aya Takeuchi

She wants to be a voice for those that are unheard. People like her mother who didn’t speak any English when she arrived in the U.S., her extended family members that only speak Spanish, her Latinx community and other immigrants with a similar heritage. She adds, “I don’t know exactly where I want to go in life, but I do know I want to help people and I want to be a voice for people.”

Yanina recalls, “When I was younger I really wanted to meet Sonia Sotomayor,” the first Latina Supreme Court Justice. Yanina looked up to Justice Sotomayor thinking that she was a Latina defying all odds, and doing incredible things. Justice Sotomayor, like the little girl who admired her, excelled by defying cultural stereotypes and speaking up against injustice.

It just so happened, while Yanina was in the fifth grade, there was an essay writing competition where the first prize was a ‘meet and greet’ with Justice Sotomayor. She wrote a satirical essay about the pledge of allegiance, commenting on the injustice that immigrants often face. Yanina won the competition and got to meet her idol. The encounter had a profound impact on her life. As a result, she hopes to go on to study law or politics and be in a position to make a difference for the people she cares about.

Yanina explores the multiple existential strands that make up the fabric of her identity in public. The stage serves as her pulpit, where she performs her pieces with fervor in front of predominantly white audiences, but also serves as an intimate space for personal reflection. When contemplating the dichotomy of public speaking and inner reflection, Yanina explains “At first, it feels weird to perform for a predominately white audience but then it feels nice. I think…‘it’s finally my time to speak. It’s my time and they’re gonna hear me’. DC SCORES has prepared me for the fact that my voice will be heard.”

Spaniards, yes you, the colonizers of my lovely country,
You hate me for the way I speak your language,
But stripped me from my native tongue.
I better not try to speak in America because they’ll tell me to speak English
But they forget their colonizers also stripped this country from their native tongue

Yanina’s poem ‘Español’ is about the struggle with her identity in the current American cultural climate. She tells me that she’s living in two worlds, but in one space. Culturally she says “I shine Latina. I speak, breathe, sleep Latina”. Born in the U.S. with Salvadoran parents, her roots travel far back to indigenous and European links. She’s a plethora of identities and that’s what makes her so unique.

Our Bright Moments in a Dark Time