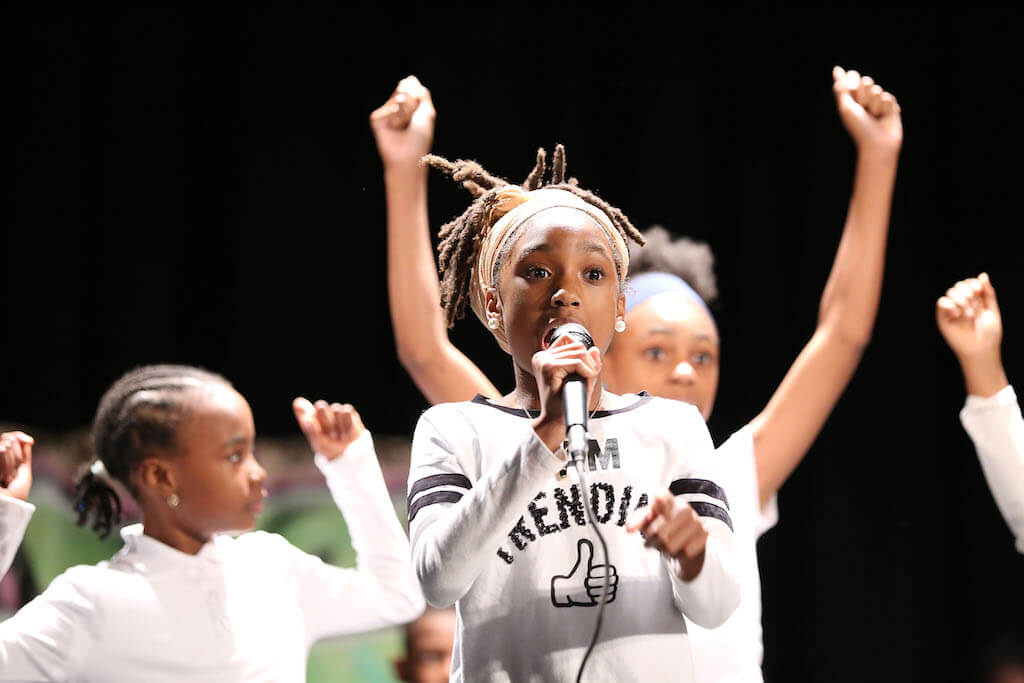 It is a word we don’t use that often anymore, but Uniyah C., a 10-year-old, reminded us of it Thursday night.

It is the best thing I know
It helps you stay confident when you’re down and sad.
Bravery helps you to believe in yourself when nobody else will.
Having bravery will not allow yourself to give up or have any letdowns.

Uniyah’s Shine Award-winning poem (best individual performance) came during the second of 22 school performances Thursday night at H.D. Woodson. It set the stage for much more courage, as kids as young as 8 delivered one powerful performance after another. Memorized. Choreographed. And performed with passion.

“So everyone, stand up, put a first in the air and show everyone how brave we are,” she concluded her poem.

Not one person in the building stayed seated. Fists were raised. And the Eastside Slam! REALLY got going.

So how do these kids show such courage on stage? Let’s start with TLC.

Teamwork, leadership and commitment are DC SCORES’ core values, and no team better illustrated their importance than the Aiton Bears, who ended the night rushing the stage for the fourth consecutive year as Golden Mic champions. 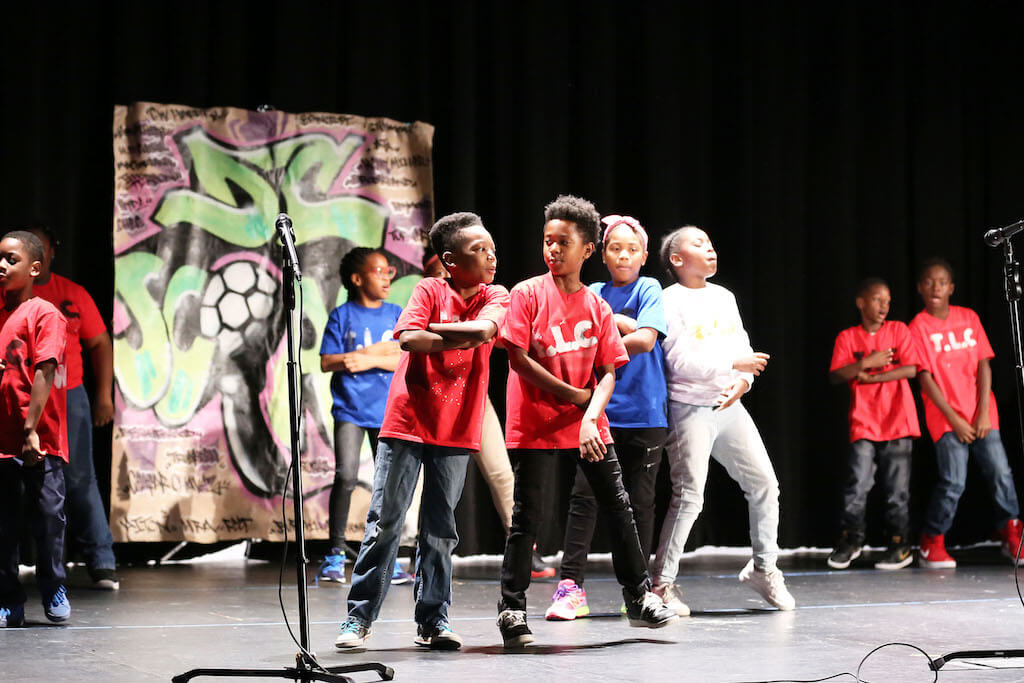 Sporting red and blue TLC T-shirts, the Bears ran through a poem about each value – their voices and movements in unison. There is an “i” in Aiton, but it’s clear that the “t” for team wins out.

Speaking of commitment, DC SCORES’ poets could probably fix our country’s problems today. In place of complaining poems (an easy thing to do in 2017!), there were myriad solution poems. Kids celebrated the present while predicting the future, their future, where they’ll be in 10 years.

Dear future me
It’s 2027 you see
So, take a look at me
I’m finishing up at KCP
It’s off to college for me to
Howard
UCLA
Spellman
Moorehouse
and…

Speaking of teamwork, it dominated the night. Sitting for three hours isn’t easy, but the schools not performing couldn’t have been more engaged. During poems that dropped a beat, they clapped along. They encourage cheered a poet who forgot a line. They high-fived other schools’ kids heading to or from the stage.

And during the dance contest, a kid from Orr who was originally shy of the bright spotlight overcame his fear thanks to the loudest cheers for any dancer from everyone crowding the stage. Teamwork made that happen.

Then there was the rap battle, a back-and-forth between two KIPP KEY girls who would’ve made Eminem proud. They might not have seemed on the same team, but they pushed each other with their lines and had the audience ooohing and ahhing. At the end of the night, the 13-year-olds, Jermoni B. and Kenniya C., stood together on stage to receive the middle school Shine Award and KIPP KEY’s third-place trophy. 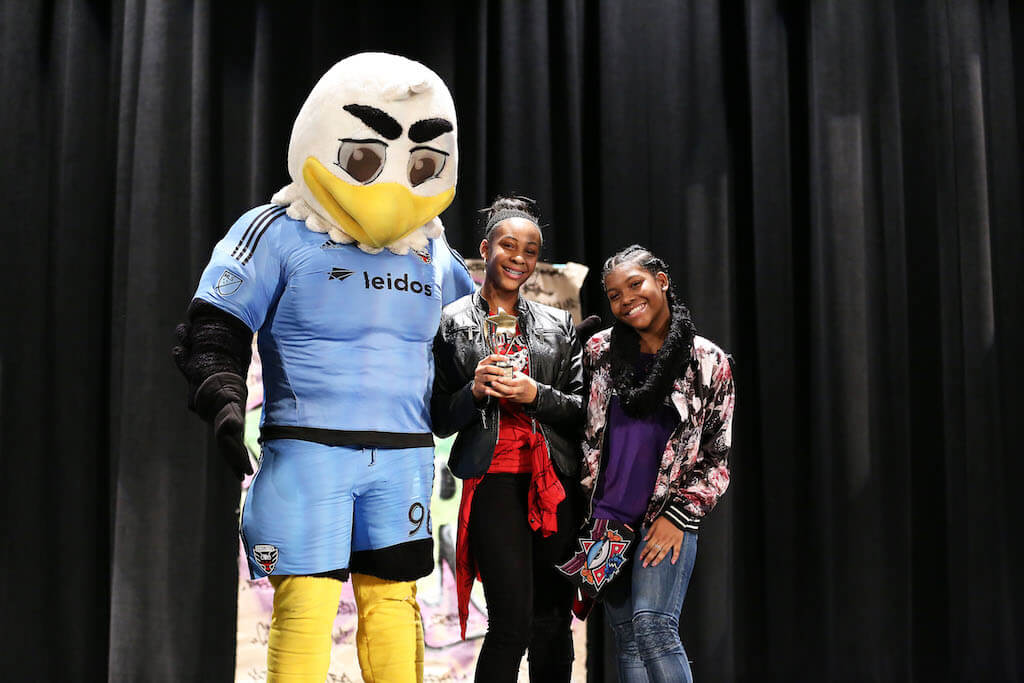 Those were the wise words of Turner Elementary, but the theme carried on throughout the night. Everyone took the lead in picturing better lives – not just for themselves but for others. That’s a pretty incredible sentiment coming from third- fourth- and fifth-graders.

But then again, this is the 12th week of the DC SCORES season. TLC is everywhere. Next to the drinking fountain before the Slam!, a kid from Imagine Hope Tolson said, “You know what? It doesn’t matter if we win or lose. Let’s just have fun.” And that’s what everyone did even if their team didn’t rush the stage at night’s end for a picture with D.C. United’s Talon.

When emcee extraordinaire Charity Blackwell asked for examples of sportsmanship before the show, a kid five rows back raised his hand and eloquently explained the importance of respecting the other team, your teammates, the referee (in soccer), your coaches, the field and yourself. We couldn’t have said it better.

TLC was on display all night, and students brought it under the bright lights one performance after another – bravery undressed and brilliant for all eyes to see.