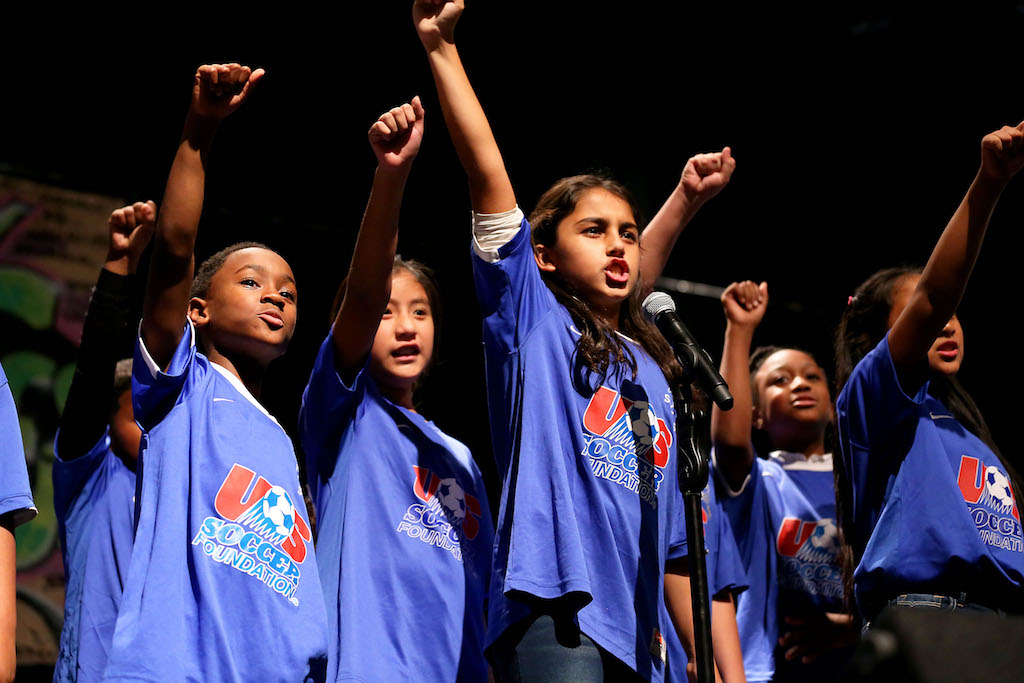 The night started with a resounding, ear-splitting “I LOVE DC SCORES” from a packed auditorium of DC kids and their families. During the following three hours, 23 teams of poets took the stage.

The poems varied widely, but a central message emerged, and then re-emerged, throughout the first night of the 20th Annual DC SCORES Poetry Slam! – we are special, we are diverse, and collectively, we are powerful.

“We’re about to blow your minds,” crowed the Seaton Stingers just minutes in the show. And that they would, as their name was called last some three hours later as the elementary school Golden Mic champion. Seaton rushed the stage for their photo with D.C. United coach Ben Olsen. That was the night’s end.

But back to the beginning…

Seaton’s Diamond G. finished her riveting, pulsating, auditorium-shaking poem “Soccer’s my thing” with those lines, and the theme carried for 21 more performances.

When the 2016 Poetry Slam! took place on Nov. 16 of last year, kids in DC SCORES and their families were just starting to feel the reverberations of possible changes in our country. Now, many of them have felt the effects of the past year. Many have been directly affected by changes around them.

On Wednesday, they let their voices be heard while celebrating their diversity and communities and shutting down stereotypes. 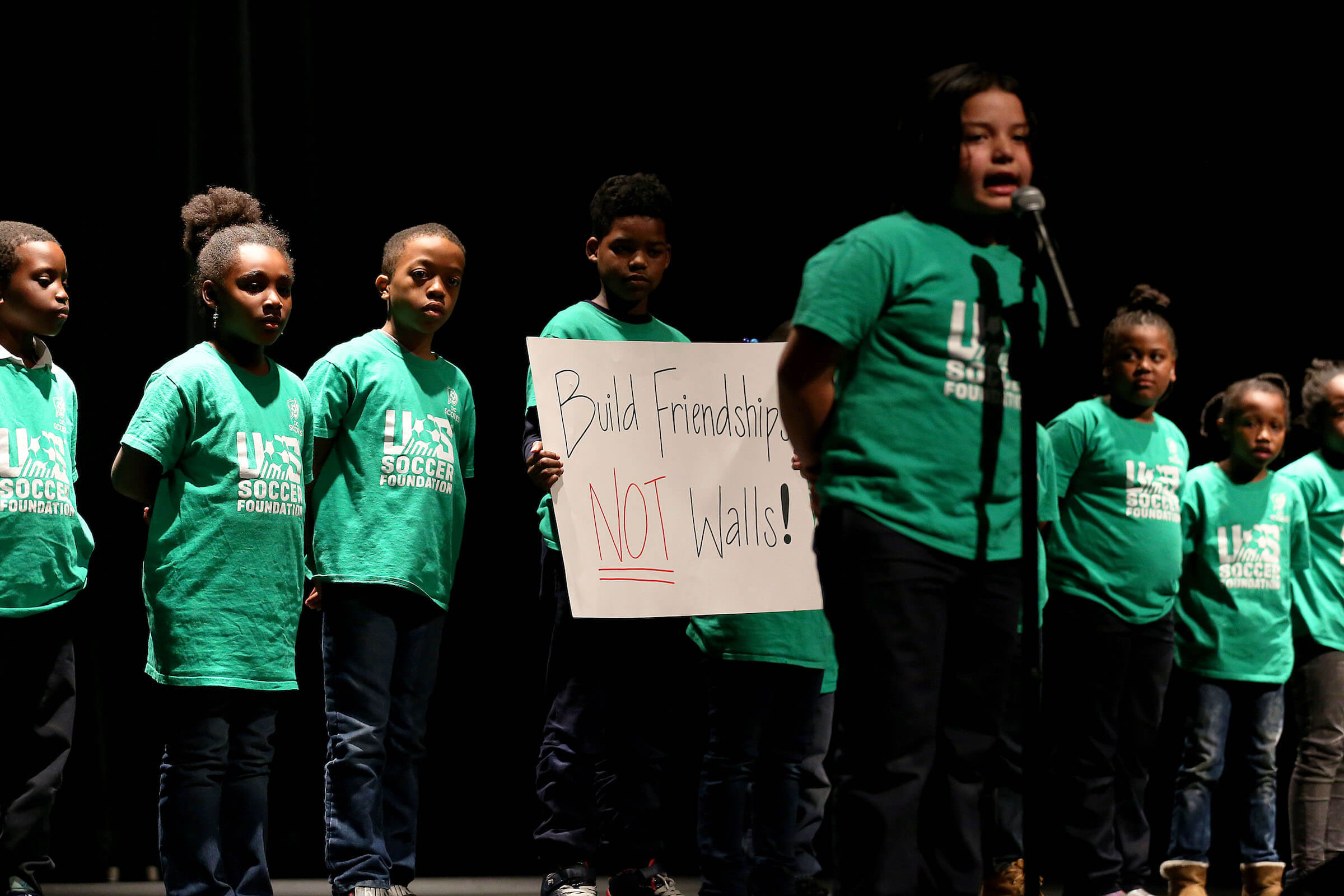 There were LaSalle-Backus’ kids, 8-10 years old, speaking about guns and the Las Vegas tragedy. One kid after another stepped to the mic to tell the crowd why they hated guns. “Guns changed my life when my uncle got killed,” a boy said. “He was only 20. A young life wasted.”

KIPP WILL took the stage next and to the beat of their song, started…

“That’s what Martin Luther King taught us,” the middle schoolers concluded. “(That) we will stand to fight, with all our might/Fighting for our rights tonight.”

There was Chavez Prep, a mostly Hispanic school, proudly letting anyone with preconceived notions know that “Just because we are hispanic…”

And there was H.D. Cooke – featured earlier in the day by WUSA-9 – reminding us all that love always wins. Marie Reed chimed in too with a poignant ode to Moms that must have catalyzed tears throughout the auditorium, if not phone calls to Moms everywhere after.

If hate has spread during the last year, it was nowhere to be found inside Roosevelt’s walls Wednesday night.

Rather, diversity was celebrated. Nearly every 5-minute performance began with a kid introducing the poem titles in English and Spanish. Many poems were performed in both languages. Kids proudly held up flags of their native countries. As always, ethnic favorite foods were celebrated, eliciting joyous laughter from the audience.

In the USA, looking for opportunities
Like work and school to build up our community
We come prepared to do the hard work
So that the children can do their homework
Teachers show students how to read, write, and dream
Using these things to live the American dream

Powell Bilingual Elementary, dressed in their orange soccer jerseys, was next and came with a unifying message: 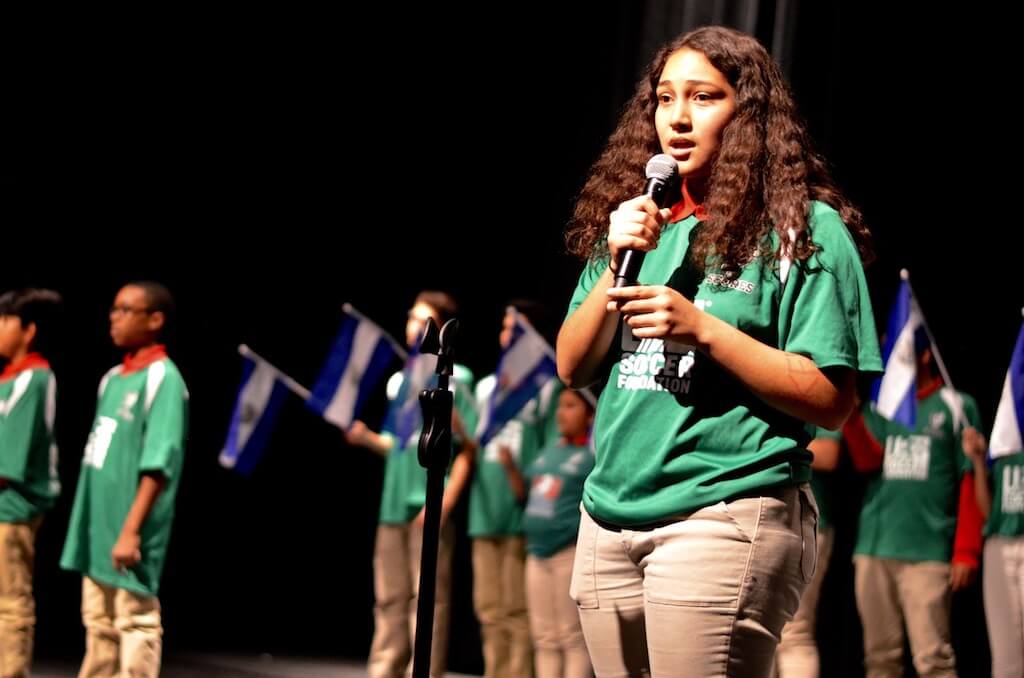 And change the world, these kids will do. Because if they can stand up in front of 500 people at such a young age and express their innermost thoughts, fears and hopes, they can do anything.

Earlier in the day, WUSA-9’s segment started like this: “DC SCORES is perhaps most well-known for offering soccer programs.” The nightcap illustrated that the passion kids have for soccer – as Diamond punctuated with her award-winning poem – translates to the stage.

Poetry is just as important. And probably even more powerful.

Nothing but bravery and inspiration at 20th Annual Eastside Poetry Slam!